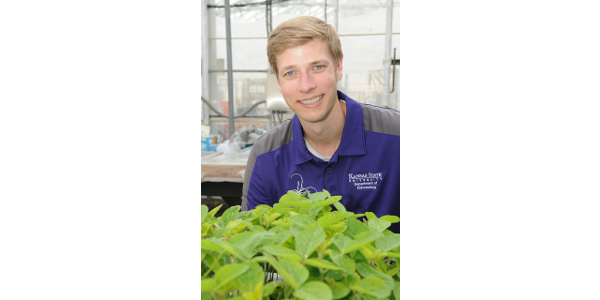 It might, particularly if it’s formed into the shape of a caterpillar that scientists can use to learn more about which insects are frolicking around a farm field.

In fact, Kansas State University graduate student Ryan Schmid recently traveled to Beijing, China where he saw first-hand how the simple use of plasticine – a brand of modeling clay similar to Play-Doh that many have grown up playing with – can help farmers improve crop yields and make more money.

“The project I was part of involved looking at biological controls that they’re using in Asia,” said Schmid, who will graduate this May with the doctoral degree in entomology.

In his case, Schmid said ‘biological control’ refers to ways that beneficial insects are used to eliminate or reduce the presence of pests in a farmer’s field. An example of a beneficial insect is the lady beetle, which is known to feed on aphids, a known pest that causes damage in farm crops.

In one experiment, “we took plasticine, rolled it up so it looked like a caterpillar and we set it out in the field. Then, we came back a day later to see what bite marks were on it, which tells us a little bit about what type of insects are in that field.”

Though the experiment was small in nature, it did give an idea of some factors that help to encourage beneficial insects around farmer’s fields.

“For us, we wanted to see how the surrounding habitat – like flowers – might support some of the beneficial biological control insects, and whether the habitat helps support beneficial insects that will then move into that field,” Schmid said.

“It was a quick experiment, really just playing around. But we did see bite marks on those caterpillars after just one day. Something was moving around those fields and the one’s that were bitten were closer to the flowers.”

Schmid said scientists have studied the habitat around farm fields for some time, so the concept is not new. But they are continually learning more about what types of habitat will encourage more of the insects that will benefit crop health and growth.

“We don’t tell farmers what to do, but we do give them options, and what we’ve found is that when you start combining some of these, it enhances their benefits,” Schmid said. “So, we are showing how those management decisions are impacting those beneficial insects, and how improving the insect and plant community will help them with profits on their farm.”

Asian farmers, for example, have planted soybeans in the middle of an apple grove in order to attract beneficial insects: “It’s all about creating a good eco-system out there while also getting a high yield on your crops,” Schmid said.

Schmid, whose graduate work at K-State included developing strategies for monitoring Hessian fly populations in wheat fields, already has a job lined up with the Ecdysis Foundation in South Dakota once he graduates in May.

“What I will be working with is called ‘regenerative agriculture,’ but it’s the same basic principle of promoting a healthy eco-system so that you get high crop yields,” he said. “We will be working to give farmers a little more confidence that this will work for them.”

More information about habitat management and its effects on the ecosystem is available from the Xerces Society, xerces.org.