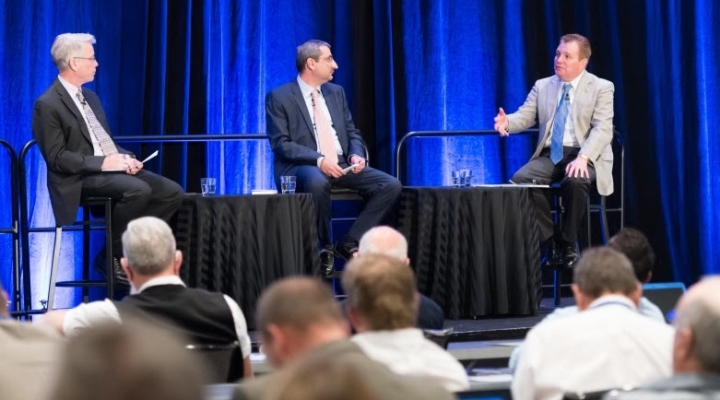 Shultz, Taieb and Cordero speak about the Middle East's demand for U.S. grains products at a panel in Denver. (Courtesy Photo)

DENVER — In a global trade environment challenged by tariffs and tensions, emerging markets for grains and ethanol provided a bright spot for U.S. farmers, agribusinesses and industry officials at the U.S. Grains Council’s 58th Annual Board of Delegates meeting in Denver.

They focused on new demand in Saudi Arabia for U.S. sorghum and distiller’s dried grains with solubles (DDGS), near-term opportunities developed following years of work by Council staff and members to set the stage with local customers.

“The Middle East and North African is a vast area with a lot of complexity,” Taieb said to the group. “However, from the perspective of the U.S. producer, it’s an important area of the world that encompasses 17 countries importing grains products valued at more than $1.8 billion.”

The Council has a regional office in Tunisia and consultants in Turkey, Pakistan, Morocco, Algeria, Egypt, Saudi Arabia and Jordan, who also covers Oman and the United Arab Emirates.

In addition to other sales in the region, speakers shared that U.S. corn sales to Saudi Arabia totaled $383 million in the 2016/2017 marketing year, a 150 percent growth over the previous marketing year.

Tuesday’s general sessions also featured a presentation on the economic conditions facing the United States and the farm economy by Will Secor, an economist in the knowledge exchange division at CoBank, a national cooperative bank serving industries across rural America. Secor said that despite developing challenges on the global trade stage, the long-term outlook for U.S. grains demand is positive.

Council Chief Economist Mike Dwyer led off the afternoon’s round of speakers, updating the farmers and other delegates in attendance on the industry’s ethanol market development efforts. The U.S. is the world’s largest producer, consumer and exporter of fuel ethanol and is the most cost-competitive ethanol supplier due to large-scale production, industry innovation and access to competitively-priced feedstock.

“No other grain-in-all-forms category comes close as a driver of growing corn demand,” Dwyer told the delegates about ethanol exports. “U.S. exports of grains in all forms could rise to a record 138 MMT by 2022 if we meet our ambitious goals.”

Dwyer was followed by Dan Halstrom, president and CEO of the U.S. Meat Export Federation, and James Sumner, president of the USA Poultry and Egg Export Council, who provided insights from their sectors, both of which are working to grow new overseas demand while defending established markets in a complicated trade environment.

According to a recent USGC and National Corn Growers Association study, grain-in-all-forms exports accounted for $55.5 billion in economic output in 2015, the most recent year with full data available, with more than 262,000 U.S. jobs connected to these sales.

More from the Denver meeting is available on social media, using the hashtag #grains18.

Farmer concerned by selfies amongst sunflowers