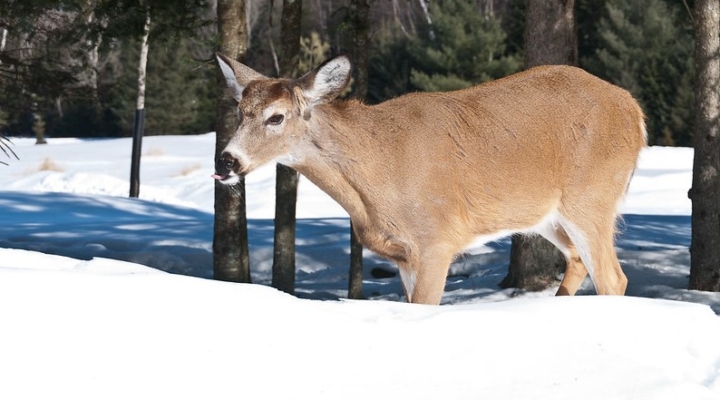 In October of 2017 DEEP officials detected an unusual die-off of White Tail deer in central Connecticut.  DEEP submitted carcasses to the Connecticut Veterinary Medical Diagnostic Laboratory (CVMDL) to establish possible causes of death. Necropsies were performed and tissues from the deer were analyzed by pathologists at the UConn laboratory. Anatomic changes observed in these tissues alerted pathologists to a disease never before recognized in Connecticut, “Epizootic Hemorrhagic Disease of deer” (EHD). Samples were referred to the Southeastern Cooperative Wildlife Disease Study at the University of Georgia where the presence of EHD virus (EHDV) was established.

EHDV causes a hemorrhagic disease in deer that is transmitted by midges, insects of the Culicoides spp. These insects also transmit the virus causing Bluetongue disease in domestic ruminants (goats, sheep and cattle). Bluetongue has not been found in Connecticut. There is a sustained expansion of these diseases in the United States linked to the geographical expansion of the transmitting vectors, in this case to northern latitudes.

DEEP and CVMDL have joined efforts over the years on discovering, detecting and reporting diseases affecting wildlife that, given environmental and ecological conditions, may spill over into livestock and human populations in the state of Connecticut.

This particular common effort, detecting EHDV in Connecticut, has initiated further studies at CVMDL to identify which species of Culicoides are responsible for transmission of the virus here in Connecticut. The Connecticut Agricultural Experiment Station (CAES) in New Haven is supporting this effort by providing CVMDL with Culicoides insects trapped across the State of Connecticut.

CVMDL, part of the Department of Pathobiology in UConn CAHNR, is on the frontlines of research and testing to keep humans and animals safe. For more information visit http://cvmdl.uconn.edu or call 860-486-3738.

Excellence in Range Management Award
May 6, 2020

Be proactive during wildfire season
April 6, 2020