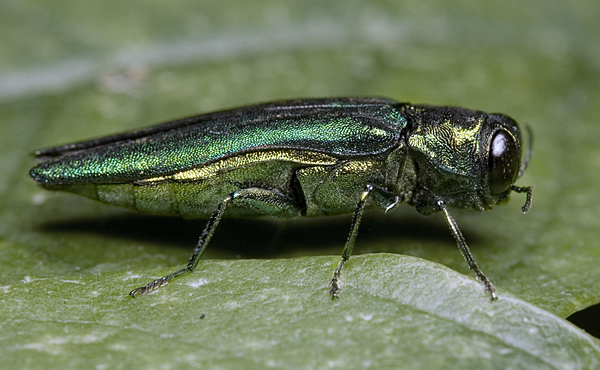 Current guidelines recommend the removal or treatment of ash trees if located within 15 miles of a known infestation. Since Delaware is geographically small and EAB can go undetected for years, residents are urged to educate themselves now and take action. (David Cappaert, Michigan State University)

DOVER, Del. — Emerald ash borer, a destructive insect from Asia that attacks and kills ash trees, has been confirmed in Newark, Del. Originally found in northern Delaware in 2016, recent infestations were confirmed in both Middletown and Seaford in November 2018.

Current guidelines recommend the removal or treatment of ash trees if located within 15 miles of a known infestation. Since Delaware is geographically small and EAB can go undetected for years, residents are urged to educate themselves now and take action.

Delaware Department of Agriculture recommends that property owners within a 5 to 15 mile radius of a positive EAB detection treat the trees they want to keep. Tree removal is strongly suggested so homeowners can protect their property and help limit the spread of this insect. For the latest information from the Delaware Department of Agriculture, residents can go to de.gov/ashtrees for an EAB Fact Sheet and an Ash Treatment Decision Guide.

Emerald ash borer (Agrilus planipennis) has been confirmed in 35 states, the District of Columbia and five Canadian provinces. The USDA’s Animal Plant and Health Inspection Service estimates that the insect has killed millions of ash trees, caused agencies to implement extensive federal quarantines, and cost hundreds of millions of dollars to municipalities, homeowners, nursery operators and forest product industries. For a comprehensive history and overview of EAB, read the Emerald Ash Borer Story Map.

The Emerald ash borer has had a devastating effect on ash trees (Fraxinus spp.) in both rural and urban areas in the United States. A hardwood tree, ash has traditionally been used for making baseball bats. Its high heat value also makes it ideal for firewood. Due to the danger of spreading invasive pests like EAB, USDA developed the “Hungry Pests” campaign urging people to curtail human-assisted spread and to help reduce the risks to the state’s forests and landscapes.

Ash is identifiable by its compound leaf with 5 to 9 leaflets arranged opposite each other. Ash trees are also one of the trees (along with maple, dogwood and horse-chestnut) that feature an opposite branching pattern. Symptoms of an EAB infestation can be difficult to notice at first, but usually include: canopy dieback, epicormic sprouting, bark splits, woodpecker damage and D-shaped exit holes on the bark. Adult beetles feed on ash leaves but actually cause little damage. The larvae feed on the inner bark of ash trees, disrupting the tree’s ability to transport water and nutrients, typically killing the tree within a few years.

The Delaware Forest Service estimates that ash comprises 2 percent of the total tree species in the state; however, some communities near urban areas have a higher percentage of ash and could be more adversely impacted.

Stop those invasives, Callery pears
May 4, 2022

Trapping gets underway for invasive pests
May 4, 2022

Controlling weeds in your farm pond
May 1, 2022