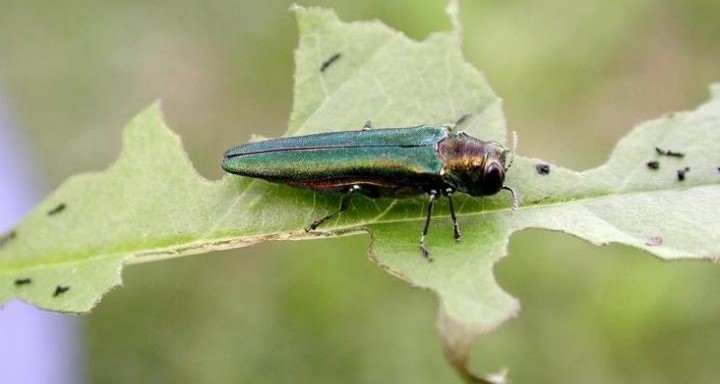 By the time the adult emerald ash borer (Agrilus planipennis) appears, it may be too late for nearby ash trees, as the pest inflicts the most damage in its larval form as it burrows beneath the bark of the tree. A new guide published in the open-access Journal of Integrated Pest Management outlines a set of four options for communities to choose from as they plan for the impact of the emerald ash borer. (Houping Liu, Ph.D., Pennsylvania Department of Conservation and Natural Resources)

ANNAPOLIS, Md. — Since its discovery in the United States in 2002, the emerald ash borer has swiftly become the most destructive non-native forest pest to ever invade the country. As the insect’s range continues to grow, despite ongoing efforts to fight it, communities with ash trees in both urban areas and woodlands are left to pick up the pieces.

Despite the seemingly grim outlook, hope is not lost. In Pennsylvania, where emerald ash borer (Agrilus planipennis) has been present since 2007, municipalities have found successful ash-management plans under guidance of the state’s Department of Conservation and Natural Resources, and they offer a model for other regions to follow. In a new guide published in the Entomological Society of America’s open-access Journal of Integrated Pest Management, Houping Liu, Ph.D., forest entomologist at the Pennsylvania DCNR, outlines a set of four options for communities to choose from as they plan for the impact of the emerald ash borer:

Thus far, emerald ash borer has defied efforts to contain or suppress its population levels over large areas. Since first appearing in six counties in Michigan in 2002, it has expanded its range, now present in 31 states plus Ontario and Quebec, Canada. “It is therefore imperative for local communities with limited resources to focus on the protection of valuable individual trees instead of emerald ash borer population management,” Liu said.

The major parts of a community ash-management plan under the Pennsylvania template include tree inventory, monitoring for emerald ash borer, management tools, wood utilization and disposal, replanting, and education and outreach, among others. In the Journal of Integrated Pest Management article, Liu summarizes 12 case studies from a state forest, a state park, five cities, and five boroughs in Pennsylvania that developed ash management plans as part of a pilot project.

“While the major components of the plan may stay the same in other areas, each community must tailor the plan to fit its own conditions and management goals,” Liu said. “For example, a community with a strong forestry department will be better prepared to draft and execute its own management plan; a community that values its ash trees will be more willing to pull its resources together to combat this problem; ash species to be protected could be different in different areas; and rules and regulations for tree removal, chemical control, and biological control could be different as well.”

Liu’s guide details the major management methods for emerald ash borer as well as reasons why the pest has outpaced control efforts. “What makes emerald ash borer so difficult to manage is the cryptic nature in its biology, the lack of effective control methods over large areas, and the complexity of quarantine enforcement,” he said. However, successful efforts have been found on local scales in eliminating outlier infestations and in treating individual trees with chemical insecticides.

In the future, employing wasps that parasitize the emerald ash borer or cultivating ash trees that are naturally resistant to infestation may become viable options, but more work is needed. For now, Liu said, the best option is: “Be prepared. The devastation is real.”

— Entomological Society of America
via EurekAlert!