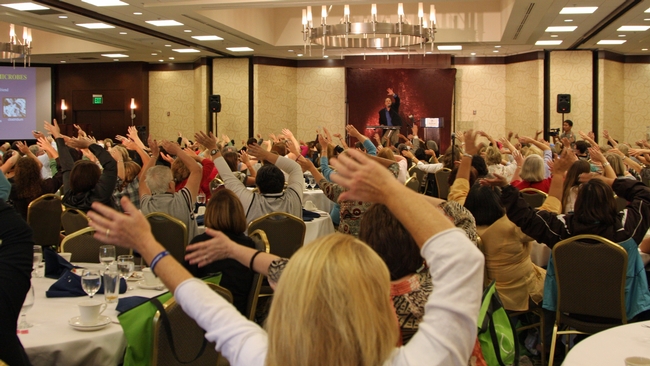 Carl Winter, shown performing at a conference, is an internationally respected food-safety expert known for using humor and music to communicate important messages about food and agriculture. (Courtesy Photo)

DAVIS, Calif. — He has been called the “Elvis of E. coli” and the “Sinatra of Salmonella,” and now Carl Winter, a UC Cooperative Extension food toxicologist for 32 years, will rock and roll his way into retirement on July 1, 2019.

Based at UC Davis, Winter researches the detection of pesticides and naturally occurring toxins in foods, how to assess their risks and how to use science in the regulatory decision-making process.

His most recent work includes investigating the relationship between allowable levels and safety levels for pesticide residues on food crops. Author of numerous journal articles, books and book chapters, he has testified before the U.S. Congress on four occasions and has given nearly 1,000 scientific presentations and more than 1,000 media interviews over the course of his career.

The internationally respected food-safety expert is equally known for using humor and music to communicate important messages about food and agriculture.

“Dr. Winter has been a strong and reassuring voice for consumers about the safety of produce and a positive influence on fruit and vegetable consumption,” said Teresa Thorne, executive director of the Alliance for Food and Farming. “He has been an invaluable resource for media, consumers, his students and the produce industry because of his ability to make complex issues understandable. He has set such a high standard and his voice will be missed.”

Winter, who is an accomplished musician, also studies how to improve educational activities by incorporating music into food safety curricula. His humorous musical parodies about food safety aim to educate through entertainment. Accompanying himself on keyboard and guitar, Winter covers Will Smith’s “Gettin’ Jiggy Wit It,” as “Don’t Get Sicky Wit It,” and The Beatles’ “I Want to Hold Your Hand” becomes “You’d Better Wash Your Hands.”

The food safety musician has performed songs at nearly 300 scientific conferences and meetings in 37 states with his own lyrics, such as “Hey, Salmonella, did you think I’d lay down and die?” for Gloria Gaynor’s “I Will Survive.” He has distributed 30,000 audio CDs and animated DVDs and his YouTubepage has received more than 1 million views. Winter’s food safety videos can also be seen at http://foodsafe.ucdavis.edu/html/video.html.

A Fellow of the Institute of Food Technologists, Winter has received numerous awards, including the 2012 Borlaug Council for Agricultural Science and Technology Communication Award; the Hod Ogden Medal from the U.S. Centers for Disease Control and Prevention /Association of State and Territorial Directors of Health Promotion and Public Health Education, for “his innovative and creative musical approach to educate the public about food safety”;  the National Science Foundation International Food Safety Leadership Award for Education and Training; and the Institute of Food Technologists Bernard L. Oser Food Ingredient Safety Award.Winter, who was vice chair of the UC Davis Department of Food Science and Technology for the past six years, also served as a member of UC Agriculture and Natural Resource‘s Program Council from 2015 through 2019.

In retirement, he plans to continue playing keyboard and guitar for the Northern California bands Petty Jack Flash, Keep on Truckin’, and Elvis and the Experience, as well as travel throughout the world with his wife, Robin.

Update on next round of Healthy Soils Program projects
February 26, 2020