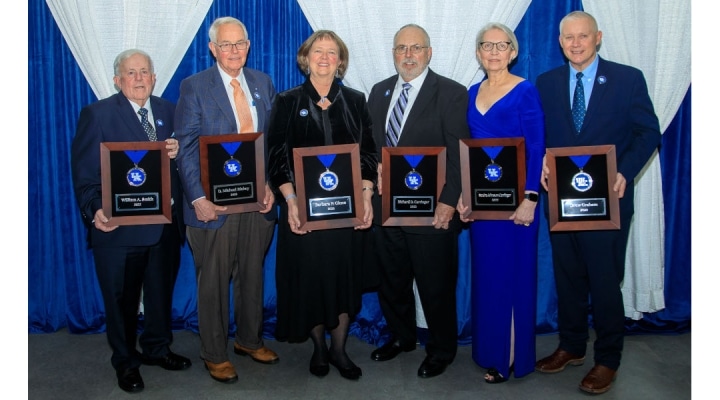 LEXINGTON, Ky. — The University of Kentucky College of Agriculture, Food and Environment inducted eight former students into the 2022 Hall of Distinguished Alumni on Feb. 25. The alumni will be honored for their meaningful contributions to the commonwealth, the nation and the world.

The prestigious event, held every two years, is part of the college’s Night of Excellence sponsored by the college and the CAFE Alumni Association. Additional awards include the CAFE Friend Award, Horizon Award and Paul Appel Alumni Service Award.

This year’s Hall of Distinguished Alumni inductees are:

After working for agricultural industries and private research groups, Sandra and Richard Carringer formed The Carringers Inc., conducting and managing research trials to provide data needed for pesticide registration. They established a second company, Carringer Ag Research Service Inc. about a decade later. Their work has been integral to developing safe biotech products, helping to improve food security and environmental sustainability worldwide. They are involved in a large, multi-partner philanthropic project funded by the Bill and Melinda Gates Foundation involving new seed production technologies to improve maize production in Africa.

The Carringers continue to support the college through establishment of a graduate student award and have been mentors and trainers throughout their careers. They reside in Apex, North Carolina.

Barbara Glenn has spent her entire career serving the agriculture community through her research, advocacy, leadership and volunteer work. Her passion for agriculture began at an early age with 4-H. She received her undergraduate degree in animal science and went on to earn a doctorate in ruminant nutrition at UK. Glenn began her career at the University of Maryland before joining the U.S. Department of Agriculture Agricultural Research Service as a research dairy scientist, a position she held for 17 years. She then shifted her career focus to government relations, working for several organizations.

From 2014 until her retirement in 2021, Glenn was chief executive officer of the National Association of State Departments of Agriculture. She was the first woman president for the American Society of Animal Science, served on the USDA Agricultural Policy Advisory Committee and was a U.S. Office of Trade representative through multiple presidential administrations. Additionally, she volunteers with the Maryland Agricultural Education Foundation Board, Howard County Maryland 4-H Foundation Board and Maryland Farm Bureau Agriculture Education and Extension Committee. Glenn lives in Highland, Maryland.

Drew Graham started his career in the livestock feed business and continued in that role while also moving into state and local government, serving as a state representative for the 73rd District. He then became Clark County judge-executive and later, director of legislative affairs for former Gov. Ernie Fletcher. He was recognized for a steady hand, creativity and bipartisanship.

Graham joined the UK College of Agriculture, Food and Environment in 2004 and was eventually promoted to senior assistant dean and director of Government Relations and External Affairs. During this time, he maintained excellent relations with state and federal officials and oversaw the extensive renovation of the UK Veterinary Diagnostic Laboratory and the UK Grain and Forage Center of Excellence. He was key to the transformation of the Kentucky Cooperative Extension Service.

Today, he serves as the executive vice president of the Kentucky Farm Bureau Federation. Graham continues to support the college as a member of the state and national councils for the advancement of extension, research and teaching. Graham lives in Winchester.

The late Percy R. Luney Sr., a native of Breckinridge County, was a war hero, a public servant who conducted pioneering work analyzing highly classified information and a champion for civil rights. He served for four years as part of the famed 92nd “Buffalo” Infantry Division in World War II and was awarded three Bronze Stars. In 1953, he completed a master’s degree in agricultural economics at UK, becoming the first African American to receive a degree from the UK College of Agriculture, Food and Environment. He went on the do post-graduate studies at the University of Chicago before taking a post as an intelligence officer with the Central Intelligence Agency.

Luney used high-altitude photography and satellite-based remote sensing to project agricultural production in the Soviet Union. He left the CIA after 11 years and moved to the U.S. Department of Agriculture Economic Research Service, Natural Resource Economics Division. In 1969, he became deputy chief for the evaluation unit in the USDA Office of the Secretary of Agriculture for Civil Rights. He developed and evaluated various tools to measure the impact of USDA programs on minority participants. He established base data to measure USDA programs’ progress toward equal access and opportunity.

Early in his career, Richey was driving throughout Kentucky recruiting students to attend CAFE, and he’s never stopped, even though his roles have changed. During his 24 years in CAFE, he led the first college development program at UK, created the first scholarship banquet, the first college donor recognition society, and he began a gift and estate planning program that became a model for others. UK then named him vice president for Philanthropy and Alumni Engagement, where he managed UK’s philanthropy and alumni programs to national acclaim until retiring in January.

During his tenure, he provided leadership, management and strategies that led to the successful completion of UK’s first-ever capital campaign which exceeded its goal of $1 billion. He completed strategic planning, staffing and the launch of the university’s current comprehensive fundraising campaign with a goal of $2.1 billion. Richey lives in Lawrenceburg.

The late Jessie Ringo had a 29-year career in home economics as a Cooperative Extension agent and college instructor. In 1937, she began her Extension career as a home demonstration agent in Hickman County. During this time, Hickman County was the first Kentucky county to participate in the 1940 Government Surplus Cotton Mattress Program. Husbands and wives worked as teams to make mattresses using skills they learned from extension agents. For most of the families that participated, it was the first mattress they owned.

In 1947, Ringo, a widow with three small children, moved to Lexington to obtain her master’s degree. She taught for one year at Murray State University before returning to UK to operate the nursery school training program in the home economics department. In 1967, she returned to her Extension roots as a Cooperative Extension agent in Shelby County, before being tapped to serve as acting chair of the UK Department of Management and Family Economics three years later. Over her teaching career, she wrote the course of study for 19 classes. Ringo retired in 1977 and passed away in 2002.

After graduating in 1970, William “Bill” Smith held positions in the agriculture industry before dedicating his career to conducting research trials and seed production for the development of triticale, a small grain. For more than 37 years, he has played a key role in the research and market development to improve triticale. He is currently the Eastern U.S. research manager for Northern AgriBrand LLC. He has annually logged thousands of miles planting on-farm variety trials while working with the U.S. dairy industry to promote improved varieties for grazing and silage.

Smith has dedicated his time and talent to his alma mater holding many roles with the CAFE Alumni Association. He was instrumental in three expansions of the Boone County Cooperative Extension office. Nationally, he has represented UK and served on the Council of Agriculture, Research Extension and Teaching in many capacities including southern region past chairman and CARET liaison on the Board of Agriculture for federal budgets. Smith lives in Union.

Oran and Myrtle Little of Lexington will receive the CAFE Friend Award for their devotion to the college. Oran Little began his career in the college in 1960 and rose through the ranks to serve the college for 12 years as dean. The effective leadership he demonstrated during his tenure as dean led to the purchase a new research farm in Woodford County which was renamed in his honor in 2010. They have traversed miles to support the college, even in retirement. The two are synonymous with Roundup—the college’s annual homecoming event. They created the C. Oran and Myrtle Little Scholarship for CAFE students.

Anthony H. Koch of Paris will receive the Horizon Award, which is given to a young alumnus who has shown career achievement and promise of future professional success. Koch, a 2002 graduate with a bachelor’s degree in agricultural economics, is director of sales and marketing for Hallway Feeds. Koch also serves is chairman of the Kentucky FFA Foundation, judges events and serves as a mentor to members. He volunteers with the Boy Scouts, YMCA, Kentucky Chamber of Commerce, Agriculture and Equine Council and Equine Committee for the American Feed Industry Association.

Bobby L. Gaffney of Versailles will receive the Paul Appel award for outstanding service to the CAFE Alumni Association. Gaffney holds bachelor and master degrees in agricultural education and his Rank I from UK. Gaffney was on the alumni board for 23 years, including serving as president. He continued to provide support as a volunteer. He also represented Kentucky on the National Agriculture Alumni and Development Association for 10 years, serving as NAADA president and chairman of the long-range planning committee. Gaffney is a farmer, retired vocational agriculture teacher and school administrator.