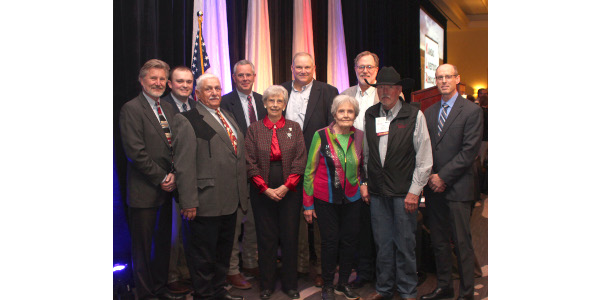 TOPEKA, Kan. — Five individuals and three businesses were recognized December 4 at the Kansas Livestock Association (KLA) Convention for joining in 1969 and now marking a half-century of continuous KLA membership. KLA currently has 107 members who have been loyal to the association 50 years or longer.

Wayne “Jackie” Leffler of Americus, who joined KLA in 1949, received an award for achieving 70 years of membership.

“It is individuals and businesses like these that joined because they saw the value KLA provides for their operations and our industry that make our association strong. These long time members are to be commended for their decades of support for the Kansas Livestock Association,” said KLA President Harry Moser, a rancher from Wheaton.

KLA is a trade organization protecting the business interests of independent ranchers, feeders and dairy farmers. Members of the association are involved in all segments of the livestock industry, including cow-calf production, backgrounding, cattle feeding, swine, dairy and sheep. The association’s work is funded by voluntary dues dollars paid by its more than 5,600 members.

KHPA hosts tournament during 3i SHOW