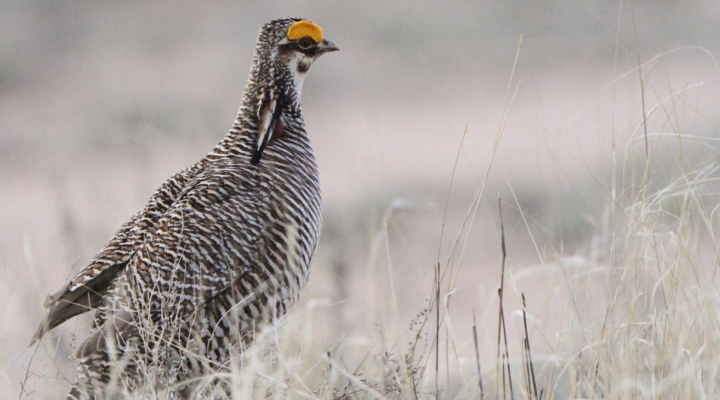 Only about 1 percent of prairie habitat remains for prairie chickens, quail, waterfowl, doves and many other grassland wildlife species. (Always a birder!, Flickr/Creative Commons)

GOLIAD, Texas (AP) — Perhaps it’s the animated dance of the Attwater prairie chicken that inspires the noble efforts of folks who refuse to imagine a Texas landscape without this dappled bird.

The Corpus Christi Caller-Times reports the grouse-like ground dweller that numbered as many as a million 120 years ago is profoundly endangered today. Its shrinking prairie habitat once spanned 6 million acres of virtually contiguous, coastal grasslands in Texas and Louisiana.

Only about 1 percent of this habitat remains for prairie chickens, quail, waterfowl, doves and many other grassland wildlife species. This situation is not unique. Prairie grassland is the most endangered ecosystem on earth.

And much of the Texas prairie is unsuitably fragmented, replaced by agricultural, residential and industrial uses, invaded by woody plants or degraded by neglect. By 1937, the once-popular game bird was down to about 8,700, all in Texas. The Attwater prairie chicken was declared endangered in 1967, years before the 1973 Endangered Species Act protections became law.

Several years ago the wild population was estimated at fewer than 100, living exclusively on the Attwater Prairie Chicken National Wildlife Refuge near Eagle Lake, and on private lands in Goliad County. Basically, a handful of mature adults scattered over 200,000 acres in two counties.

Years ago, in the grasslands around Goliad, hundreds of handsome and showy male prairie chickens would gather each spring on clearings called leks to perform what’s been called the quirkiest mating display on earth. Hens would view the pageant from surrounding tall grass, hidden from suitors.

Nature columnist Gary Clark described the ritual of the greater prairie chicken, a cousin of the Attwater, for the Houston Chronicle. The Attwater dance is the same, according to Sonia Nájera, The Nature Conservancy’s Grasslands Program manager.

“They lowered their heads and uttered low-pitched drones — something like “woo-WHOOO-dooo-oooh” — which were amplified by the ballooning orange sacs at the sides of their throats, which act as bellows,” Clark writes. “The droning sounds, called booming, bound a mile across the prairie.

“The birds boomed and stamped their feet with the resonance of tango dancers. When a hen wandered onto the lek, the males began furiously charging at each other while erecting long ear feathers, called pinnae, in the shape of horns.

They leapt into the air, wings flapping fiercely, and voices uttering cackles, whoops and whines. One male bowed in front of a hen. She turned and allowed him to pounce on her back, grab her neck feathers and mate with her, all in the blink of an eye.”

Folks who have witnessed the Texas version of the spring courting ritual said they could not turn away from the choreographed antics. Everyone watching was captivated, even enchanted by the ancient prairie chicken cha-cha.

Scientists from The Nature Conservancy could be counted among the enchanted by the birds’ plight. Jay Kelso has been an Attwater specialist since 2007, and Kirk Feuerbacher is a conservationist practitioner dedicated to an effort to re-establish Attwaters to the Goliad-Refugio Prairie.

Kelso, whose colleagues describe as an Attwater savant, spends about 340 days a year tending to his charges. In all seasons, he’s in the Refugio-Goliad Prairie, which spans about 200,000 acres. He spends seven days a week patrolling for prairie chickens during more than nine months of the year. The remaining 10 weeks, he might take weekends off.

The effort involves bringing in young birds hatched in captivity at five breeding facilities, the closest of which is operated by the Houston Zoo. The brood stock is carefully paired to assure the greatest level of genetic diversity. The U.S. Fish and Wildlife Service is deeply involved in this part of the program, as well as with the overall effort to remove the Attwater from the endangered species list.

The public’s support for this effort might best be illustrated by the level of private funding it receives, said John Magera, who manages the Attwater Prairie Chicken National Wildlife Refuge. Magera said the program gets $250,000 to $500,000 annually from nonprofits, foundation grants and private donations.

For the species to be down-listed to threatened, the overall wild population must reach a minimum of 3,000 breeding adults, and must maintain that level for five years. The birds’ habitat would be deemed sufficient to support this population at 150,000 acres.

A level of care similar to the genetic protocols is dedicated to choosing the land on which to deposit these rare fowl. Biologists with The Nature Conservancy and other organizations, work with scientists from the fish and wildlife service, to find remote oceans of grass, where huisache and other brushy plants do not disrupt the property’s pristine nature.

This has been Feuerbacher’s specialty since 2003. This, plus returning the landscape to prairie, while courting conservation-minded ranchers to participate in the program. The word partnership is overused today, but the term truly applies to these essential landowner linchpins.

The late Marie O’Connor Dunn Sorenson was one of the pioneer partners in this effort. She was a bird lover. But more than that, her children say their parents considered land ownership a sacred trust.

“We were raised to believe we were stewards of the land,” said Morgan Dunn O’Connor, whose family owns thousands of acres near Goliad, where hundreds of prairie chickens have been released since 2007. “I remember as a child hearing my grandparents, my parents, aunts and uncles talking about conservation as an obligation and taking care of the land for the wildlife, the cattle, and for the next generation.”

O’Connor said when her mother learned biologists considered her Goliad property as the sweet spot for prairie chickens, she was immediately determined to turn the family stewardship obligation into an opportunity to save an endangered species.

The Fish and Wildlife Service and the Coastal Prairies Grazing Lands Coalition entered into what is called a Safe Harbor agreement, which involves willing landowners.

Ranchers agree to maintain and enhance the habitat for prairie chickens by controlling invasive plants and brush, conducting prescribed burns and grazing, while taking steps to rid of the property of insidious fire ants, which compete with young prairie chickens for insects. Feuerbacher helps with all of this. In exchange, the landowners are assured no new regulations and additional responsibilities will be imposed.

“But the most important partners in the cooperative effort are the landowners, who’ve been conserving coastal prairies for generations,” Anderson said.

The O’Connor family already was maintaining a pristine natural habitat long before 2007, when they signed up for the program, Feuerbacher said.

Morgan Dunn O’Connor said her parents groomed their children to continue this legacy.

“They conveyed a sense of reverence they had for the prairie,” O’Connor said. “When I was a junior in college, Daddy recorded sounds of home and sent them to me. I’ll never forget getting a recording of wind on the prairie. Back then I didn’t even know what a prairie chicken was, but I loved the prairie and cared for everything on it. That’s how we all felt.”

Over the years, about 600 or more juvenile Attwaters have been released on the O’Connor property. They arrive when they’re nearly three months old, then remain in large fly pens for two weeks to become acclimated.

Native grasses grow inside the pens, but natural forage is supplemented with frozen vegetables, mostly corn, peas, and green beans. After the birds are released, trays of veggies are placed outside the pens for a time. Then they’re on their own.

Several of the Goliad birds have mated in the wild, and their chicks have hatched. Not many. Successes today are celebrated, but also measured against setbacks, such Hurricane Harvey, which killed Attwater prairie chickens at both locations. Drought also is a killer.

Radio tracking devices are placed on many of the hens. And much of Kelso’s time is spent tracking and gauge their habitat preferences, keeping inventory of survivors and charting the health of birds. He monitors about 100,000 acres or 156 square miles annually. Birds have ventured as far as 13 miles from the release site, which means many other landowners on surrounding ranches are involved in the program.

A hundred years ago, young Attwaters that survived 10 weeks had about a 50 percent chance of becoming adults. Today, between 17-30 percent of program birds that survive their first 10 weeks reach maturity.

That’s just the nature of releasing pen-raised birds, which is the Attwater prairie chicken’s primary hope. That, plus a hopeful and dedicated army of workers, scientists, ranchers, and well-wishers, with the will, funding, land and resolve to pull off this noble effort.

“People ask me why I’m doing this,” said Morgan Dunn O’Connor. “If they have to ask, it’s impossible to explain to them. Some people go to the prairie, and they just don’t get it. What’s there to see, they ask. I love it, and I got it as a child, thanks to my parents.”