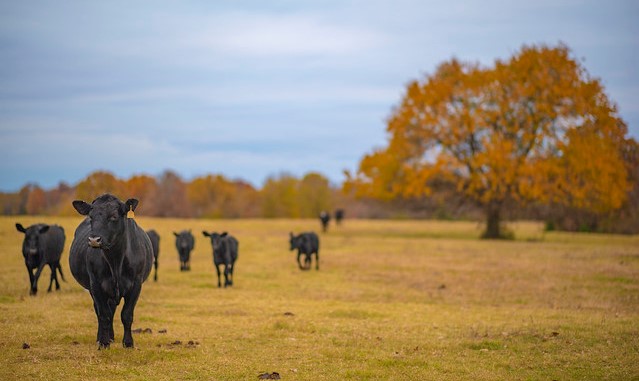 LRP allows producers to insure between 70% and 100% of the projected price of their cattle. The projected price is based upon feeder cattle futures prices and varies depending upon the type of cattle (e.g., steers or heifers) and the weight of the cattle. The insurance coverage can be matched to the time that the cattle would typically be sold. For example, a producer calving in April and then marketing in September would typically obtain a policy that provides protection against price declines from April through September. LRP provides coverage for cow/calf, stocker, and feedlot operations.

Frequently, producers brought up their desire to better protect themselves when prices fall.  While they believed that LRP was an outstanding fit for their operation, during conversations with hundreds of producers, two complaints commonly arose. First, they wished LRP cost less, and, second, they wanted more coverage options that coincided with the months they were selling their livestock.

Nearly two years ago, Brandon Willis and Aaron Tattersall, two agents who work with western livestock operators, brainstormed on ways to overcome these problems. Making changes of this magnitude typically doesn’t begin with an agent, but these agents have unique backgrounds that played a key role in the effort. Tattersall from AgRisk Advisors, is an agent of Silveus Insurance Group and was one of the first agents advising western ranchers on risk management opportunities. Willis from Ranchers Insurance LLC was the head of USDA’s Risk Management Agency from 2013-2017 where he oversaw USDA’s insurance programs, including LRP for the U.S. Secretary of Agriculture.

LRP, like many of USDA’s insurance products, was developed by the private sector and then approved and reinsured by USDA, operating like all other USDA insurance products. In early 2018 Willis reached out to LRP’s developer who was already considering some improvements and graciously agreed to request additional changes to LRP if the agents provided some assistance with the process. Willis helped draft certain changes and Tattersall worked with cattle ranchers across the U.S. to demonstrate strong support for these changes. Support for the changes came from state and national producer groups, crop insurance companies, insurance agencies and state secretaries and directors of agriculture from Montana, Pennsylvania, and others.

On Monday these efforts paid off as USDA announced that it had approved changes that significantly improve LRP.  “These improvements are directly tied to what cattle ranchers requested. The developer of LRP and USDA deserve a lot of credit for these improvements,” said Willis.

USDA announced the following LRP improvements would be made:

What do these changes mean for a cow-calf producer? A producer insuring 500 calves that will be marketed at 550 pounds could expect to pay around $7,700 for coverage that begins in April and ends in October if they covered approximately 95% of the projected prices. Once the changes take effect the cost would be approximately $1,000 less.The combination of reduced cost and additional options will mean that LRP is a tool beef producer should strongly consider. “Margins are too tight to not take these changes seriously.  Having a tool that directly addresses price volatility directly addresses what so many producers need,” said Tattersall.

Producers who are interested in learning more about LRP should reach out to a USDA-approved insurance agent. A list of agents can be found on RMA’s website under “find an agent.” Tattersall can be reached at (303) 539-9300 and Willis can be reached at (866) 374-2112.