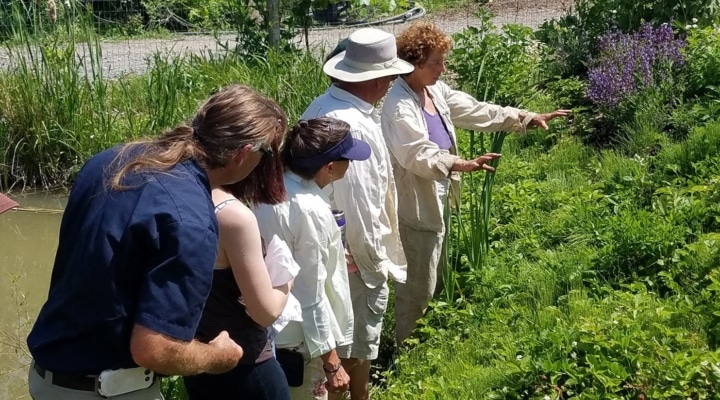 Baker’s presentations at the two NOFA conferences will focus on the edible forest garden she began developing in 2012. NNYADP research-related plantings in the certified organic, multi-purpose, perennial garden include the “super fruits” Juneberry, honeyberry, and aronia. The garden’s fruits, nuts, herbs, and other edibles are grown for u-pick and for sale at the farm and to restaurants.

Data from Baker’s garden is adding to the NNYADP project evaluating high-antioxidant fruits for production in New York and the Northeast. The project established New York State’s only genomic research nursery of wild-collected and commercial cultivars of Juneberry.

Participating in and attending workshops on NNYADP research results has also influenced the way Baker grows cherry tomatoes in her hoop house and her use of cover crops for weed suppression. Her latest NNYADP-related trial involves the application of biocontrol nematodes for pest management.

“I learned about the potential for using biocontrol nematodes at a Northern New York Agricultural Development Program meeting where Cornell University Entomologist Elson Shields spoke about the successful transfer of the biocontrol nematodes for alfalfa snout beetle management to pest management in berry crops. I am excited to see if the nematodes will help manage plum curculio in my garden long-term. This past year I did not have any issues; so-far, so-good,” Baker said.

While the one-acre permaculture garden draws researchers, growers, chefs, home gardeners and food enthusiasts to the NNY farm, Baker credits the NNY food hub feasibility survey funded by the NNYADP and conducted by Cornell Cooperative Extension with analysis by Cornell University with creating a foundation for marketing her products to other areas of New York State.

“The food hub project was a boon for our farm, opening up market opportunities for our livestock, fruits, herbs, vegetables and niche products in the Syracuse and Utica markets,” said Baker, who co-owns Cross Island Farms in New York State’s 1000 Islands region with David Belding.

QuickBooks for Farmers and Growers

Three steps for Mainers to follow before heading outdoors
April 2, 2020