Home / DelMarVa / Ed Jones receives national Cooperative Extension organization’s most prestigious level of recognition
A new user experience is coming! We'll be asking you to login to your Morning Ag Clips account March 1st to access these new features.
We can't wait to share them with you! Read more here. 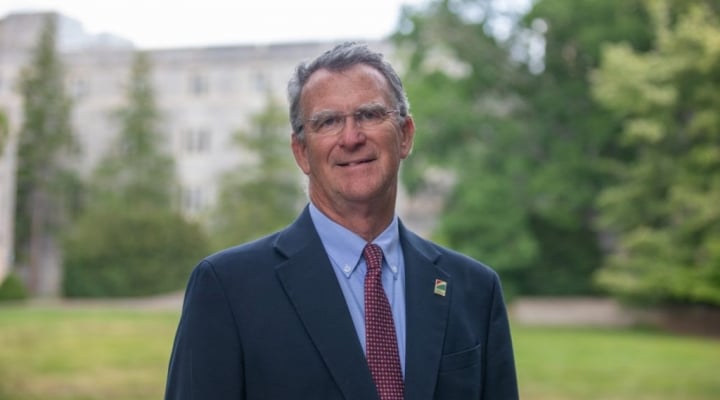 Ed Jones, director of Virginia Cooperative Extension, recently received the 2021 Distinguished Service Ruby Award — the most prestigious level of recognition from Epsilon Sigma Phi, one of the oldest organizations of Extension professionals — for his outstanding leadership, innovative thinking, and sustained exceptional performance across his 37 years in Cooperative Extension.

BLACKSBURG, Va. — Ed Jones, director of Virginia Cooperative Extension, recently received the 2021 Distinguished Service Ruby Award — the most prestigious level of recognition from Epsilon Sigma Phi, one of the oldest organizations of Extension professionals — for his outstanding leadership, innovative thinking, and sustained exceptional performance across his 37 years in Cooperative Extension.

The award is a reflection of Jones’ dedication to and focus on the land-grant model, which in Virginia delivers the resources and knowledge of the commonwealth’s land-grant universities, Virginia Tech and Virginia State University. Jones is regarded around the country as a visionary leader who is charting a path for Extension that marries its rich history of impact with bold ideas on how the organization will continue to serve its constituents in a rapidly evolving world.

“I am extremely humbled to receive this honor,” Jones said. “I have believed in the mission of Extension since my first interactions with it as a young boy growing up in Mercer County, Illinois. Over the years, I have had the pleasure of working with so many talented and kind people who share in this belief that we can make a positive impact in our communities. This award is truly a reflection of the incredible members of Cooperative Extension with whom I have worked. Without the dedication of everyone in Extension, we would not be in the strong position we are today.”

Jones was an Extension specialist and administrator across the Southeast before he became the director of Virginia Cooperative Extension and associate dean of the College of Agriculture and Life Sciences at Virginia Tech in 2011. During his tenure in Virginia, he has expanded Extension’s reach and scope and helped provide its renowned services to the people of the commonwealth when they needed them most.

“This award recognizes the outstanding leadership Dr. Jones has provided to Virginia Cooperative Extension and our university,” said Virginia Tech President Tim Sands. “His guidance during the pandemic has been invaluable and his vision for Extension is helping advance our modern land-grant mission across the commonwealth and around the globe.”

The Ruby Distinguished Service Award of Epsilon Sigma Phi is reserved for the most accomplished leaders of Cooperative Extension.

“Dr. Jones has demonstrated outstanding leadership and dedication to the land-grant mission of Cooperative Extension throughout his career,” said Greg Price, executive director of National Epsilon Sigma Phi. “His influence has not only been within the state but also as a national leader. We are honored to invite Dr. Jones to join the list of accomplished Ruby Award recipients.”

Jones’ career is yet another example of Extension’s impact on society.

He forged his leadership style while he working as the associate director of Extension at North Carolina State University. In 1999, Hurricane Floyd triggered the third-largest weather-related evacuation in the United States at the time, devastating communities along the East Coast. It was then, as he worked with the state of North Carolina to help with recovery, that Jones learned how to lead during major crises.

From his early days in Extension, Jones has been an integral part of authoring or co-authoring publications, including some 15 peer-reviewed publications and proceedings dealing with wildlife, natural resources management, and leadership. He also helped secure more than $7 million in grants and awards for research and Extension work over the course of his career.

Jones has been a member of Epsilon Sigma Phi since his induction into the Xi (North Carolina) Chapter in 1992, receiving a state award for visionary leadership in 2006.

Jones has a bachelor’s degree in zoology from the University of Washington, and a master’s and Ph.D. from Virginia Tech in fisheries and wildlife science. He has held leadership positions in the Extension Disaster Education Network, the National Association of Community Development Extension Professionals, and the Southern Region Program Leader Network.