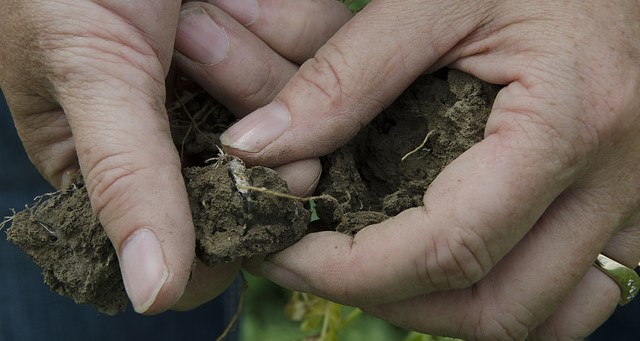 Most of us farmers are unaware that carbon, and its management, is the most critical element in our farming systems, probably because we don’t purchase carbon in a sack like we do N-P-K. (USDA NRCS, Flickr/Creative Commons)

Owing to unstable climates, carbon has been getting a bum rap of late, quite undeservedly so. Most of us farmers are unaware that carbon, and its management, is the most critical element in our farming systems, probably because we don’t purchase carbon in a sack like we do N-P-K. Were there a “most friendly atom” award, carbon should be its slam dunk winner. Though it could be different on some other planet, carbon is the very stuff of life on this one. Only late in a 40-year farming career did I come to appreciate that we farmers are simply managers of photosynthesis, a singular, miraculous photochemical reaction that energizes all Earthly life. Our crops are solar collectors, whose leaves gather light energy from the sun, carbon dioxide (CO2) from air, and water (H2O) from soil, transforming these into simple sugars, or carbohydrates, the chemical energy with which plants fuel all other life activities. Only a few decades back, we who studied soil science in distinguished US agricultural universities learned about the physical and chemical properties of soils, but little if anything about soil biology, now revealing itself to likely be the most diverse and complex web of life on our planet. Agriculture can no longer operate in ignorance of this earth-shaking reality.

Should you be among a “Those who can, do; those who can’t, teach.” crowd, North Dakota farmer Gabe Brown ‘does’. Brown courageously embraced what must have at first appeared to be harebrained agroecological notions after a series of late last century crop failures, which threatened his generational farm’s survival. Under Archuleta’s and other pioneering agronomists’ guidance, Brown began incorporating green manure crops, diverse multispecies cover-crop cocktails, and intensive rotational grazing into his system, while broadening his rotation to include 25 crops over his several thousand-acre no-till farm. Not an intentional organic farmer, Gabe’s soil building efforts, over time, enabled him to reduce commercial fertilizer use by 90% and herbicide use by 75%, while maintaining better than county average yields and lowering unit cost of production. Meanwhile, his rainfed soils’ infiltration and water retention rates increased dramatically, as did soil organic matter, tripling from 2% to 6%, over two decades. Gabe Brown will share these on-the-ground, money-in-the-pocket experiences with EcoFarm Conference attendees in short courses, the keynote session and in workshops over four days.

David Johnson, neither agronomist or farmer, is among a handful of pioneering scientists who are unraveling secrets from an immensity of life that teems in the soils beneath our feet. Genetic DNA mapping has revealed that some 35,000 unique bacterial species inhabit a mere handful of healthy soil, few of which are named or yet understood as to the roles they play in soil function. Late blooming molecular biologist David Johnson focuses on fungi, hundreds of distinct species of which can be present in a healthy agricultural soil. On most of our farms, tillage and chemical inputs have greatly disrupted the fungal community, limiting a soil’s ability to form stable aggregates or to deliver nutrients and water most effectively to growing crops. At New Mexico State University, where Johnson’s ‘Composting Bioreactor’ pumps out a uniquely fungal-dominant product, experimental plots, inoculated with just a few hundred pounds per acre of this compost, are showing restored soil fertility with extraordinary biomass volumes and regenerated microbial diversity. In pre-conferences, a keynote session and workshops, David will demonstrate how we can reproduce similar results on our farms, an effort, if spread widely, that would suggest agriculture’s potential for decelerating climate change.

So, what is all this hullabaloo over carbon farming then? It is becoming understood that carbon is the currency of the soil’s economy, while photosynthetic plants mint this medium of energy exchange. Plants are known to invest as much as 70% of that fixed carbon wealth in root exudates to nourish soil microbial allies who drive nearly all essential soil functions supporting plant life. If you weary of seeking to cure recurrent pest and disease issues in your crops, maybe the answer is soil health and not more medicine. Ray Archuleta laments “Our soils are naked, hungry, thirsty and running a fever!” If you hunger for solutions, not Band-Aids, invest the time to come listen and look at what this trio of soil health luminaries has to offer at the 38th EcoFarm Conference.

CDFA seeks proposals on fertilizer use