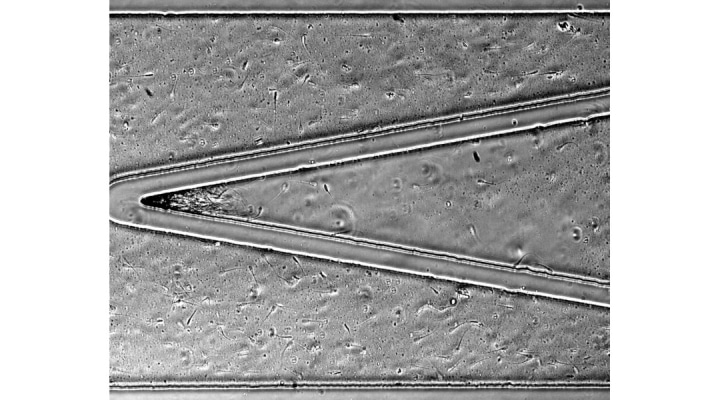 The V-shape of the microfluidic probe allow researchers to count the number of sperm swimming upstream in a simulated reproductive tract. This shows the virility strength for bulls. (Courtesy Photo)

ITHACA, N.Y. — Forget sending bull semen out for complicated laboratory tests to learn whether the agricultural animal is highly virile.

Soon, a quick and easy method – reminiscent of a home pregnancy test – can tell if a breeding bull has the right stuff.

By borrowing from nature, Cornell food scientists and chemists have developed a system – they call it RHEOLEX – that can accurately indicate the fertility level of bulls. Their research published March 14 in the journal Lab on a Chip.

“With this new RHEOLEX method, you can conduct better selection and breeding for bulls and cows, which can translate into higher quality and quantity products like improved milk and meat,” said Alireza Abbaspourrad, the Youngkeun Joh Assistant Professor of Food Chemistry and Ingredient Technology in the Department of Food Science, College of Agriculture and Life Sciences. “This saves breeders and producers time.”

Nature uses a biological process called rheotaxis, in which the bull’s sperm swim upstream in the reproductive tract of cows. Traditionally, sperm quality is evaluated using computer-assisted sperm analysis, which measures swimming speed and concentration. However, the computer-assisted analysis ignores rheotaxis, the strenuous process of sperm moving against the female’s biological stream.

In this scientific effort led by doctoral student Mohammad “M.J.” Yaghoobi, the group mimicked the cow’s the female reproductive tract dimensions and hydrodynamic features in a microfluidic model, to quantify the sperm’s rheotaxis ability.

Working with the Cornell NanoScale Facility, the scientists fabricated a microfluidic device (with tracts a little larger than human hair) into what looks like a home pregnancy test. The platform measured the number of sperm – during the rheotaxis route – at varied flow rates.

The stronger the rheotaxis power, the better the semen’s reproductive quality.

“This combination, along with the motile (fast speed) sperm concentration determination, can quickly predict fertility levels in artificial insemination,” Yaghoobi said. “We can predict the bull’s in vivo sperm fertility level within five minutes.”

Thawed bull semen samples were tested in the device and the results showed a higher rheotaxis quality – indicating a higher fertility level.

Unlike conventional semen quality parameters, which fail to provide statistically significant predictions, the RHEOLEX is an easy biomarker for determining in vivo male fertility, Yaghoobi said.

“We are essentially taking rheotaxis results and translating that into signals that tells us the bull fertility level,” Abbaspourrad said, “which is great, because it can save companies a lot of money by selecting the best bulls. We are using nature’s selection process and that’s a huge difference.”

In addition to Abbaspourrad and Yaghoobi, other co-authors on the research, “Rheotaxis Quality Index: A New Parameter That Reveals Male Mammalian In Vivo Fertility and Low Sperm DNA Fragmentation,” are Morteza Azizi, Ph.D. ‘20, and doctoral students Amir Mokhtare and Farhad Javi.

The Cornell NanoScale Facility is a member of the National Nanotechnology Coordinated Infrastructure (NNCI), which is supported by the National Science Foundation. Abbaspourrad is a faculty fellow at the Cornell Atkinson Center for Sustainability.