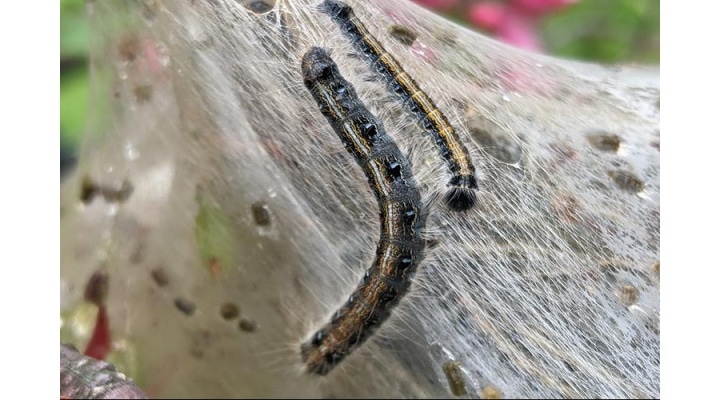 LEXINGTON, Ky. — Eastern tent caterpillars have begun to hatch, with the first detections in Southern Kentucky last week. According to entomologists in the University of Kentucky College of Agriculture, Food and Environment, the caterpillars, which can cause foal losses, are expected in Central Kentucky by this or next week and Northern Kentucky a few days to a week after that.

After spending about nine months as eggs in masses on twigs of wild cherry and related trees, the first tiny eastern tent caterpillars of the season are now leaving their eggs said Jonathan Larson, UK extension entomologist. The egg hatch normally occurs at 50% bloom of forsythia, the interval between first and full bloom of the common spring-blooming plant. The larvae are among spring’s first active insects and are well-equipped to cope with Kentucky’s erratic temperature swings. Egg hatch occurs over several weeks in early spring. This increases the chance for survival in case of late freezes. The caterpillars grow and develop when the temperature is above 37 degrees F. Their preferred food plants are wild cherry, apple and crabapple, but they may appear on hawthorn, maple, cherry, peach, pear and plum as well.

When mature, the 2- to 2.5-inch long, hairy caterpillars have a habit of wandering from their host trees to seek protected areas to spin their cocoons, or to seek additional food if their natal tree becomes defoliated. At such times, they may crawl along fence lines and into pastures.

Consumption of large numbers of caterpillars by pregnant mares caused staggering foal losses in the Mare Reproductive Loss Syndrome outbreak of 1999-2001. MRLS can cause early- and late-term foal losses or weak foals. UK researchers conducted studies that revealed horses will inadvertently eat the caterpillars when present in pastures and feedstuffs. It is the caterpillar hairs, specifically the cuticles of those hairs, that embed into the lining of the horse’s alimentary tract. Once that protective barrier is breached, normal alimentary tract bacteria may gain access to and reproduce in sites with reduced immunity, such as the fetus and placenta.

If practical, farm managers should move pregnant mares from areas where wild cherry trees are abundant to minimize the chance of caterpillar exposure. The threat is greatest when the mature caterpillars leave trees and wander to find places to pupate and transform to the moth stage.

Eastern tent caterpillars are also a nuisance to people living near heavily infested trees. The nests and defoliation are unsightly, and the caterpillars may wander hundreds of yards in search of protected sites to spin cocoons and pupate.

“Managing ETC in small ornamental trees, such as flowering crabapples, is easy,” said Daniel Potter, UK entomology professor “Just wear a pair of grocery store plastic bags like mittens, climb a stepladder, pull out the tents, turn the bags inside out to ‘bag’ the caterpillars and stomp them. Pruning out nests in ornamental trees sounds great, but in reality, by the time they are noticed, they’re often in branch crotches where pruning will compromise the symmetry of the tree.

“Spraying the flowering fruit and decorative trees preferred by the caterpillars can be a bee hazard – and with some products, a label violation – because the trees are in bloom with bees visiting them at the same time eastern tent caterpillars are active,” he said.

According to Potter, caterpillar management around horse farm paddocks comes down to keeping pregnant mares away from infested trees and either removing or not planting preferred host trees near paddocks. Additionally, controlling the caterpillars with insecticides may be warranted in some settings. That may require treating tall trees that are difficult to spray.

For the latter scenario, professional arborists treat via trunk injection. Products labeled for eastern tent caterpillar control include Tree-äge and TreeMec (emamectin benzoate), Inject-A-Cide B (Bidrin), Abacide 2 (abamectin) and Lepitect (acephate). Applicators should read and follow all label instructions. All of the aforementioned injectable products are labeled for use on horse farms.

For farms that are interested in prevention over the winter months, Larson recommended farms search for and destroy egg masses before they hatch.

“Egg masses can be seen over the winter, they look like sparkly, pyrite gum wrapped around twigs and branches,” he said.

For more information about how to assess trees for egg masses, the UK Entomology publication, Checking Eastern Tent Caterpillar Egg Masses, is available at https://entomology.ca.uky.edu/ef449.