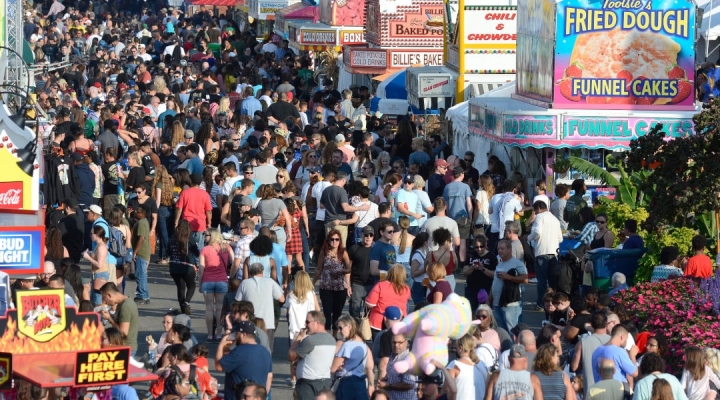 A diverse concert line-up of more than 80 individual performances, delicious Fair foods, rides and unique shopping experiences provided something for everyone in the family. (Photo: The Big E)

A diverse concert line-up of more than 80 individual performances, delicious Fair foods, rides and unique shopping experiences provided something for everyone in the family.

The E Stage, sponsored by Blue Chair Bay Rum, featured fresh sounds of local and emerging talent, offered every day of the Fair.

The Young Building featured products from around the world, including Ireland’s Dingle Peninsula Showcase with an array of authentic Dingle merchandise ranging from Louis Mulcahy Pottery, Brian de Staic Jewelry, Dingle Crystal, and more! The Dingle Peninsula Showcase was also the location of this year’s new Halfway to St. Patrick’s Day celebration.

The Front Porch Sponsored by Westfield Bank was introduced this year inside Gate 5 as a new district for food, shopping, and memorable moments. It included several new food vendors and the Feel Good Shop Local Marketplace.

The Big E’s Space Chat Experience took place in The Big E Arena as New England students made live radio contact with Astronaut Bob Hines on the International Space Station. As part of an educational program intended to promote Science, Technology, Engineering, and Math (STEM) activities, the Space Chat was an out of this world opportunity brought to students and Big E fairgoers by Amateur (Ham) Radio Operators.

We welcomed new additions to the dining experience in 2022.

The Big E’s newest Cream Puff flavor – Chocolate – was a big hit! Cream Puffs, with or without ganache topping, and Eclairs proved to be a fairgoer favorite once again.

This year the Best of Fair award, our new annual initiative that highlights partners, people, and organizations for their product and brand excellence, was bestowed upon five groups. The following organizations and individuals were the 2022 Big E Best of Fair recipients: FFA on Sept. 17; Harpoon Brewery on Sept. 22; Wayne Carini & Mike Brewer host of Collector Car Live on Sept. 25; Dingle Distillery on Sept. 26; and Yankee Candle on Sept. 28.

The Eastern States Farmers Market and Wine Barn offered fairgoers a variety of agricultural demonstrations, such as spinning and weaving, cooking demonstrations, samples from The Big E Northeast Gold Wine, Cider & Perry Competition, wine slushies and cheese plates in the Wine Café and thousands of 4-Hers & FFA youth participated in competitions and demonstrations. The 4-H Beef Grand Champion Steer, raised by Rylee Rousseau of Rhode Island, was purchased by The Barnyard at the Fair’s 4-H Beef Auction. ESE purchased the Middleweight Commended Steer, raised by Lily Dias of Mass. Overall, twenty-five steers were sold with an average of $4.64/lb.

Each state building along the Avenue of States put its best foot forward to bring our fairgoers an authentic New England experience. Storrowton Village Museum offered tours of its 19th century buildings, staffed with “villagers” going about their daily routines, as well as historic demonstrations and glassblowing on the Green.

New England Center – Home of The Big E’s Creative Arts Department, the New England Center housed displays of entries and winners in competitions for quilting, lace making, rug hooking, sewing, doll making and knitting competitions. The department had 1,311 total entries throughout all contests, judged 155 quilts and had 503 entries in the photography contest.

Our reach across social media excelled this year among followers and fans. Across all of our platforms we ended the Fair season with 45.8k Instagram followers, 12.7k Twitter followers, over 246k Facebook followers, and 13.3k followers with our newest addition – TikTok!

About The Big E

The Big E is America’s only multi-state fair celebrating the rich history, culture and traditions of the six New England states. As the principal event of Eastern States Exposition, The Big E has presented the finest livestock; agriculture; innovative commercial, industrial, and artistic developments; and the highest caliber of varied entertainment to the people of the northeastern United States for over a century. The 17-day event has grown to become the largest fair in the Northeast.

And the tradition continues next fall – September 15 through October 1, 2023. Stay up to date with all the happenings at Eastern States Exposition by finding us on social media @TheBigEFair, joining our mailing list, and visiting our website TheBigE.com. 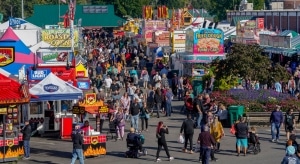 SPRINGFIELD, Mass. — The Big E is back! With a stellar line-up of entertainment, exhibits, fair foods, rides, shopping and more. ENTERTAINMENT Music lovers, get ready to put on your dancing shoes as The Big E presents more than 80 live bands on three stages: The Big E Arena, sponsored by Truly Hard Seltzer All […]

Apply for the Farm to School & Early Childhood Grant!