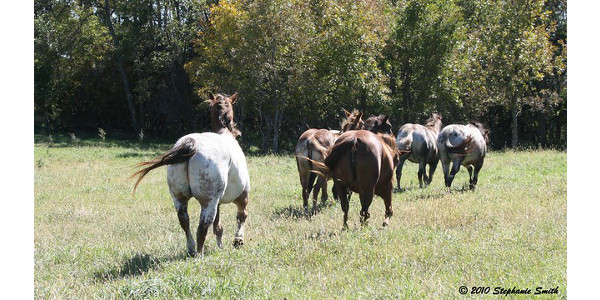 EEE is a zoonotic, viral disease, transmitted by mosquitoes to both animals and people. (Stephanie Smith via Flickr)

LANSING, Mich. — The Michigan Department of Agriculture and Rural Development (MDARD) State Veterinarian, Dr. Nora Wineland, confirmed the first case of Eastern Equine Encephalitis (EEE) for 2020 in a two-year-old filly from Clare County, which underscores the need for both horse owners and Michigan residents to take precautions.

EEE is a zoonotic, viral disease, transmitted by mosquitoes to both animals and people. EEE is one of the most dangerous mosquito-borne diseases in the U.S., with a 90-percent fatality rate among horses that become ill and a 33-percent fatality rate among humans who become ill. Last year, Michigan experienced 50 cases of EEE in animals and a record of 10 cases in humans. The virus is typically seen in late summer to early fall each year in Michigan.

People can be infected with EEE from the bite of a mosquito carrying the virus. The disease is not spread by horse-to-horse or horse-to-human contact. In humans, signs of EEE include the sudden onset of fever, chills, and body and joint aches. EEE infection can develop into severe encephalitis, resulting in headache, disorientation, tremors, seizures, and paralysis. Permanent brain damage, coma, and death may also occur in some cases.

“In 2019, Michigan experienced the worst outbreak of EEE ever documented in the state, with 10 human cases—including 6 deaths and 50 cases in animals from 20 counties,” said Dr. Joneigh Khaldun, chief medical executive and chief deputy director for health for the Michigan Department of Health and Human Services. “Michiganders are strongly urged to take precautions to protect themselves from mosquito bites. It only takes one bite from a mosquito to transmit the virus, which can lead to severe neurologic illness, permanent disability, and sometimes death.”

“This Clare County horse was never vaccinated against EEE, and it developed signs of illness—including walking in circles, leaning to the right, and pressing her head against objects—which progressed to the horse being down on the ground with an inability to get up,” said Dr. Wineland. “Horse owners in Michigan should take extra measures to protect their animals.”

To protect your animals, measures could include the following:

To protect yourself and your family, here’s what you should do now:

Horse owners are urged to vaccinate their animals
September 10, 2020