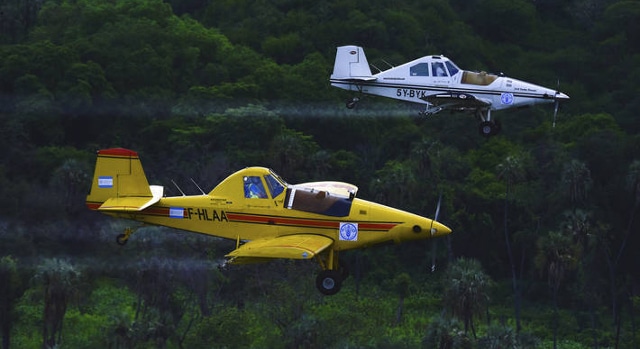 NAIROBI/ROME — A locust fighting force assembled by countries in East Africa to combat an invasion of the crop-devouring pest is at risk of seeing its activities grind to a halt as funding to sustain its operations dries up, the Food and Agriculture Organization of the United Nations (FAO) warned today.

Without additional financing for fuel, airtime, and pilot hours, the 28 anti-locust aircraft which are now patrolling the skies to spot and spray locust swarms could cease operations in March, the Organization told partners at a virtual briefing event today.

“The locust fighting machine that has been assembled in East Africa is now fully equipped and able to contain, suppress and we believe, eventually end this record-breaking upsurge,” said FAO Deputy Director-General Laurent Thomas.

“Governments have built up capacity in record-time. Swarms have been massively reduced in number and in size. It would be tragic to throw these achievements away just as the nations of East Africa are starting to see the light at the end of the tunnel,” Thomas said, adding: “There is a real possibility they could bring this upsurge to an end this year, but they need to be able to continue doing what they are doing, without faltering.”

Some $33.8 million in additional funding will be needed to allow that to happen through June, FAO informed humanitarian partners at today’s briefing, urging them to help East Africa and Yemen get through the last mile of their desert locust marathon.

A quantum leap in readiness

When the first wave of locusts first exploded across East Africa in early January 2020, fuelled by heavy rains dumped by an abnormally late season cyclone, many countries had little or no capacity to monitor movements of the pest or mount control activities at scale. Indeed, most had not seen a locust incursion of such magnitude in over 50 years.

Now, one year on, with FAO support they have succeeded in fielding a locust fighting force in the air and on the ground that involves 28 airplanes and helicopters, 260 ground units, and some 3,000 newly trained spotters and control operators.

Over 6,000 hours of air sorties have been flown to spot and spray infestations of the pest. New innovations such as the eLocust3 digital tools, satellite imagery, artificial intelligence, and trajectory models have been harnessed to report locusts in real-time and deliver maps of infestations, breeding areas, and migration routes.

More than 1.5 million hectares of land have been treated in East Africa and Yemen since the start of the campaign in January 2020.

FAO estimates these efforts helped avoid crop and dairy losses worth an estimated at $1.2 billion, safeguarding the livelihoods of 28 million people.

While the locusts remain a threat, East Africa is starting off 2021 on a much better footing.

The upsurge that started last January has been sustained by consistently favourable weather conditions ever since, causing a cascade of reproduction that saw an unusually large population of the pest disperse and persist across the region, notwithstanding the successful large-scale control operations that were scaled up to meet the threat.

And in recent months, heavy rains and another late-season cyclone sparked a new round of breeding, causing more swarms to form. As a result, Kenya and southern Ethiopia are currently being re-invaded, after having beat back the first incursion last year. Even the United Republic of Tanzania recently witnessed a swarm in the northeast.

But despite this renewed activity, the situation today is not at all the same as it was 12 months ago, thanks to generous donor support, according to FAO.

For one, the countries of the region are now prepared, equipped, and ready.

Secondly, the numbers of Desert Locusts are much reduced, with fewer swarms of decreased density and size.

For instance, one mega-swarm detected last year in Kenya covered 240 000 hectares of land, an area the size of Luxembourg. Today, however, control teams are treating smaller swarms of 100-1 000 hectares or so at a time.

“The last time Africa saw an upsurge of locusts approaching this scale, in the Sahel, it took two years and more than $500 million to bring under control. This upsurge was even bigger, but East Africa is poised to end it — provided governments can keep those aircraft flying,” said FAO’s Thomas.