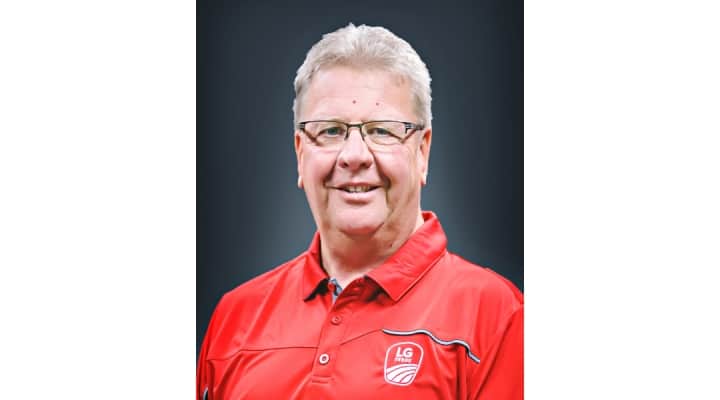 Dan Mitchell, LG Seeds agronomist in the mid-South and Delta, says products like biologics, starter fertilizers and fungicides have come a long way over the past decade. (Courtesy Photo)

WESTFIELD, Ind. — Mother Nature has a major impact on the corn crop in its early vegetative growth stages, but there are still steps farmers can take to improve plant health and yield potential, says Dan Mitchell, an LG Seeds agronomist in the mid-South and Delta.

“This year, farmers are looking at the dollar signs and wanting to take one nitrogen source, generally dry urea, and apply it prior to planting, completely skipping side-dressing,” says Mitchell, who warns that’s a bad idea.

“You can’t afford to skip side-dressing,” he says, reminding that nitrogen is one of the most critical nutrients for corn throughout the growing season.

Nitrogen works best if it’s applied when the plant needs it most. When it comes to side-dressing, that’s in the V6 to V8 stages and later when rapid nutrient uptake is taking place.

Tip #2: Biologics, starter fertilizers, micronutrients are worth a look

High corn and fertilizer prices also have more farmers interested in products like biologicals to improve crop potential and soil health or starter fertilizers to give corn plants an early boost. The latter is particularly important for fields in a conservation tillage program.

Such products have improved immensely over the past decade, with many now backed by sound research and results. Mitchell says many starter fertilizers can provide return on investment. “Even if they don’t add yield directly, they can enable plants to grow more efficiently, resist stress, and dry down sooner. That earlier, drier corn crop is an economic benefit,” he says.

With a multitude of products on the market, deciphering which are worthwhile can be difficult. Mitchell says, “I encourage farmers to make sure there’s science behind it. Start small, test it on some acres, but don’t get carried away with a new product until you’ve proven to yourself there is a return on investment. And then if there is, expand it to more or all of your acres.”

More farmers in Mitchell’s area are also adding nutrients like sulfur, zinc, manganese and copper to their starter fertilizers or later in their fertility programs. These can provide for more complete feeding of the crop to get it through the V6 to V8 stage when it has a more ample root system and is more sufficient on its own.

Weed control is another major focus when corn crops are in the V4 to V6 stages of development. Heavy weed growth, especially grassy weeds, can really sap the plants, Mitchell says.

He also emphasizes the importance of being ready to apply fungicide in areas where Southern Corn Rust (SCR) or Gray Leaf Spot are likely to occur. SCR can knock 20 to 30bushels per acre off yields quickly. Farmers should monitor the SCR northward movementfrom southern areas and be ready to act, he says.

Fungicides are most commonly applied aerially during the period between full tassel and two weeks after the tassel has been accepted. But multiple applications may be needed, since most fungicides have a maximum protection window of 20 to 30 days, Mitchell adds.

Fungicides have also improved substantially over the past decade, he says, with many now using three different modes of action to protect against diseases.

Would you like more tips on building yield? LG Seeds prides itself on having a lot of boots on the ground for superb customer service and sound recommendations. Contact your local LG Seeds agronomist today.