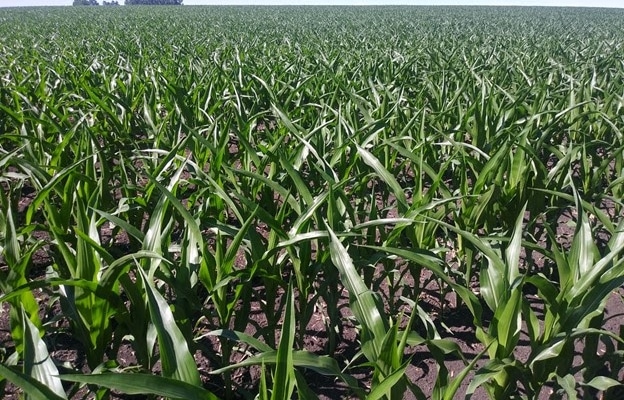 ST. PAUL, Minn. — Extremely hot weather and lack of rain in Minnesota is making growers worried about the impact on crop yield. Through this blog post we have tried to provide an overview on early season drought effects on corn and soybean and provide recommendations on irrigation management.

The severity of drought stress in corn is indicated by the time of day when leaf rolling begins. Plants that exhibit leaf rolling early in the morning are under more stress than those that begin leaf rolling later in the day. Drought stress during vegetative growth can reduce plant height, but it typically does not reduce the number of leaves produced (Lauer, 2012).

The nodal root system is the primary root system of corn from the three leaf collar stage (V3) until maturity. Nodal roots establish at just 0.75 inches below the soil surface. Therefore, dry soil at a depth of 0.75 inches can restrict nodal root growth, especially when the soil at this depth is loose, compacted, or cloddy. Poor nodal root establishment reduces the ability of corn to extract soil water and stand upright. In fields where there is poor nodal root establishment, some plants will lean from upright as early as the five leaf collar stage (V5), as their small nodal root systems are unable to support their aboveground weight. Following rainfall, additional nodal roots can establish in moist soil.

In conclusion, drought stress to corn during the early- to mid-vegetative stages is likely to have only a small negative effect on corn grain yield. If corn is under drought stress at V13 or beyond, yield loss is expected to be greater, with the level of yield loss dependent on the time and duration of drought stress.

Because drought stress is nearly ubiquitous throughout time and across biomes it has had a strong evolutionary impact on nearly every plant species. Plants have multiple and complex systems to respond to drought to ensure that they can produce as many viable seeds as possible.

Some important responses can be seen in soybean. But note, corn has a very similar pattern of reactions to drought. Early in drought stress, soybean plants re-orient their leaves and expose the lighter side of their leaves, to absorb as little light energy as possible. Next, plants slow their rate of leaf expansion to reduce water losses. At roughly the same time, plants reallocate resources from shoot development to root development, and within the roots, the soybean plants reallocate resources from shallow roots to assist with the development of deep penetrating roots. Nitrogen fixation begins to fail under dry soil conditions. Lastly, as drought stress intensifies, photosynthesis itself can be compromised.

Due to reallocation of nutrients and reduced water potential in the shoot, early season drought stress reduces rates of stem elongation and leaf area expansion (Hoogenboom et al., 1987b), leading to smaller leaves than fully watered plants. After rains return, however, drought-stricken plants have been shown to grow more rapidly than those not stressed (Hoogenboom et al., 1987b), resulting in similar sized plants overall, producing similar yields.

From a practical standpoint, significant drought stress during the vegetative period of soybean development primarily pauses plant growth. Leaf expansion is slowed or stopped and only under severe drought does photosynthesis slow or stop. Reducing photosynthetic rates results in a permanent effect on yield potential as this represents a lost opportunity for yield accrual. However, at early growth stages, soybean plants are collecting only a portion of available light, anyway. Reduced photosynthetic rates for a few hours per day tends to have little yield effect on soybean prior to R1.

In fact, soybean is quite resilient to most stressors through early reproductive growth. Figure 1 shows soybean yields relative to unstressed plants in a series of experiments where soybeans have been exposed to stresses such as (drought, shading, heat, or defoliation). While stresses during seed filling can have a large effect on seed yield, little research, including that on drought, has demonstrated significant yield losses to stressors prior to seed filling.

Water use and irrigation

The term evapotranspiration (ETc) and crop water use are used synonymously to describe the water movement from the soil through evaporation and from the plant surface through transpiration. Understanding of the critical water use periods for corn and soybeans to maximize the yield potential and to improve water use efficiency can help in efficient irrigation management.

The maximum amount of water that the soil can hold and total water available to the plants is dictated by the soil type. Fine textured soils, like clays, can hold more water than coarse textured sandy soils. For your particular soil type, the soil water and soil water depletion can be measured and estimated using soil moisture sensors or weather based irrigation scheduling tools https://z.umn.edu/irrigationmgmt. For the early season corn and soybeans, relying on stored soil moisture as much as possible is recommended to encourage deeper root systems. Crops with deeper root systems can withstand drought conditions better.

For irrigated fields, water applications in early growth stages can be reduced without impacting the yield much, as long as water stress is alleviated during early reproductive periods (Lamm and Kheira, 2008). For corn and soybean, soil water depletion can be as high as 60-70% in the early vegetative growth stage without affecting plant development.

In dry seasons when crop water demands are really high, like the one we are experiencing right now, water availability for irrigation could be an issue later in the season so it is beneficial to use this water cautiously at the stages that can withstand water stress and use that water later in the season near tasseling and early reproductive periods.