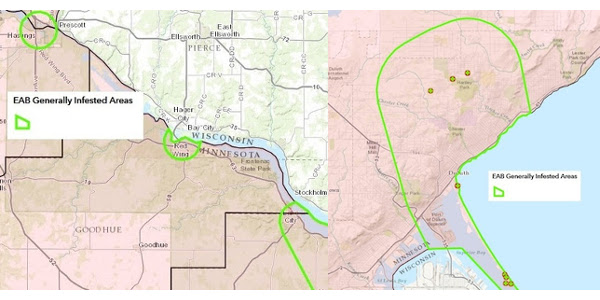 (Left) EAB is known to be in Hastings, Red Wing and Lake City. (Right) Known EAB infestations in Duluth. (Courtesy of Minnesota Department of Agriculture)

ST. PAUL — Emerald ash borer (EAB) was discovered in Red Wing at Barn Bluff and as a result an emergency quarantine was declared on Goodhue County on March 2, 2017. A comment period regarding the regulations has been opened through April 17 with a target date of May 1, 2017 for inclusion of Goodhue County in the statewide EAB quarantine. Comments can be submitted to:

After EAB was found near Hartley Park, Duluth in September, 2016, an area of southeastern St Louis County was placed under emergency quarantine. Based on feedback received during the ensuing comment period, the MDA proposed expanding the quarantine to include a portion of northeastern Carlton County as well and opened a new comment period regarding that proposal. However, after additional comments and review the MDA decided to maintain the original quarantine boundaries and the southeastern portion of St Louis County was formally included in the state quarantine for EAB on March 6, 2017.

Additional finds of EAB have since been made in Hartley Park and also about a mile to the west.