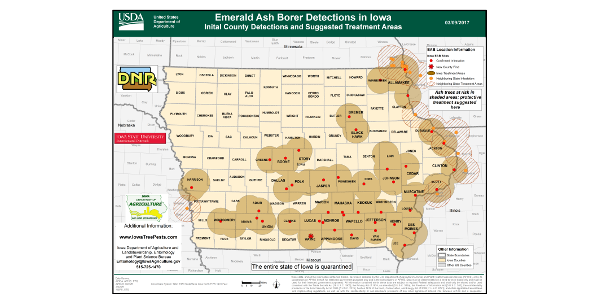 The emerald ash borer (EAB), an exotic species of beetle that attacks and decimates ash trees, has been confirmed in Greene and Wayne Counties.

DES MOINES, Iowa — The emerald ash borer (EAB), an exotic species of beetle that attacks and decimates ash trees, has been confirmed in Greene and Wayne Counties. Native to Asia, EAB has now made its way to forty-three counties in Iowa.

Both recent detections occurred in rural areas. In Greene County, the insect was discovered east of Grand Junction. In Wayne County, it was found north of Corydon. Specimens from these sites were confirmed by a federal identifier.

“We encourage homeowners and people dealing with trees as a profession to report possibly infected trees,” said Mike Kintner, Iowa Department of Agriculture and Land Stewardship EAB and gypsy moth coordinator. “We are particularly interested in finding EAB in counties not yet known to be infested.”

The adult beetle is metallic green in color and measures approximately one-half inch long and can be noticed during the summer months. The larvae burrow through the inner layer of bark, eating away at the vascular tissue which supplies nutrients to the tree. Starved trees usually die within two to four years.

At this calendar date, the window for all preventive treatments has closed. If a landowner is interested in protecting a valuable and healthy ash tree within 15 miles of a known infestation, he or she should have landscape and tree service companies bid on work, review the bids, and treat beginning spring 2017 (after mid- April).

A federal quarantine, enforced by the U.S. Department of Agriculture, remains in effect and restricts the movement of all hardwood firewood and ash articles out of Iowa into non-quarantined areas of other states. To help reduce people from unknowingly transporting EAB and other destructive tree-killing pests, Iowan’s are strongly encouraged to use locally sourced firewood.

The Iowa EAB Team provides EAB diagnostic assistance to landowners and includes officials from Iowa Department of Agriculture and Land Stewardship (IDALS), Iowa State University Extension and Outreach, the Iowa Department of Natural Resources (DNR), USDA Animal Plant Health Inspection Service and the USDA Forest Service. Anyone who suspects an infested ash tree in a county not known to have EAB is urged to contact the Iowa EAB Team.

Additional information, maps, and photos of EAB are available at www.IowaTreePests.com.