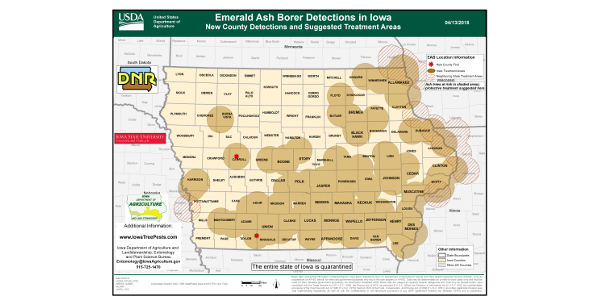 EAB has now been detected in 57 Iowa counties since first being found in Iowa in 2010. (Courtesy of Iowa Department of Agriculture)

DES MOINES — Emerald ash borer (EAB), an ash tree-killing insect introduced from Asia, has been discovered for the first time in Taylor and Carroll Counties. EAB has now been detected in 57 Iowa counties since first being found in Iowa in 2010.

The recent discoveries took place in Clearfield in Taylor County and a rural area west of Carroll in Carroll County. In both instances a tree service alerted the Iowa Department of Agriculture and Land Stewardship after recognizing potentially EAB infested ash trees. The presence of EAB was later confirmed after insect specimens were collected at both sites.

Since its initial discovery in the U.S. in the Detroit area in 2002, this pest is responsible for killing tens of millions of ash trees. At this time EAB has been found in 32 states. Since the beetle only travels short distances on its own, people serve as the primary mode for transporting EAB to new areas. In the larval stage beneath the bark of a tree it can unknowingly be transported in firewood or other wood products. The Iowa EAB Team strongly urges Iowans to use locally sourced firewood, burning it in the same county where it was purchased.

EAB-infested ash trees can include branch dieback in the upper crown, water sprouts along the trunk and main branches, vertical bark splits, D-shaped emergence holes, S-shaped tunneling under loose bark, as well as woodpecker damage. EAB larvae kill ash trees by tunneling under the bark and feeding on the part of the tree that moves nutrients up and down the trunk. Ash trees usually die within 2-4 years.

The State of Iowa continues to track the movement of EAB on a county-by-county basis. Citizens who suspect EAB as an introduction to your area are encouraged to contact one of the following:

If a landowner is interested in protecting a valuable and healthy ash tree within 15 miles of a known infestation, the treatment window for protecting an ash tree begins very soon. Soil treatments should be made from mid-April to mid-May. Basal trunk sprays should be applied mid-May to mid-June. Trunk injections begin once the tree has a full canopy. Full details are available in Iowa State University Extension and Outreach publication PM2084: https://store.extension.iastate.edu/product/13114

To learn more about EAB and view maps of its distribution, please visit www.IowaTreePests.com.