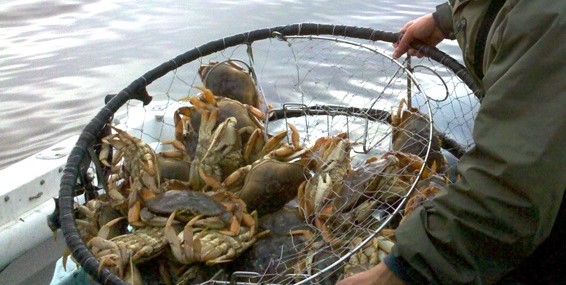 After wholesale buyers sought to lower the purchase price, fishermen from Northern California to the Canadian border went on strike. (California Department of Fish and Wildlife, Flickr/Creative Commons)

SAN FRANCISCO (AP) — Some consumers may have to settle for not-as-fresh Dungeness crab and others could wait a little longer for their first taste of the season as fishermen from Northern California to the Canadian border strike after wholesale buyers sought to lower the purchase price.

The strike was extended Friday to include markets in San Francisco and Half Moon Bay, where customers have been able to buy the holiday dinner staple since November due to a season that opened in phases.

The strike started Wednesday after Pacific Choice Seafood in Humboldt County, California, offered to pay $2.75 a pound for Dungeness crab, said Ken Bates, vice president of Humboldt Fishermen’s Marketing Association. Crabbers whose seasons had already opened had negotiated a price of $3 a pound.

Prices were not set in all fisheries because the West Coast commercial Dungeness crab season opened in waves this year, due to elevated domoic acid levels that made the crustacean unsafe to eat.

Crab fishermen who are receiving $3 a pound say they won’t let others receive any less for the wildly popular seasonal food.

The market price at Fisherman’s Wharf at the start of the season ranged from $5.50 to $6.50 a pound, and prices generally increase as the season wears on and volume shrinks.

“The fishermen love that consumers love it. It is a beautiful product this year, but the fishermen need to be able to harvest it,” said Lisa Damrosch, vice president of the Half Moon Bay Groundfish Marketing Association.

“The whole coast is all tied up,” he said.

Copyright 2016 The Associated Press. All rights reserved. This material may not be published, broadcast, rewritten or redistributed.