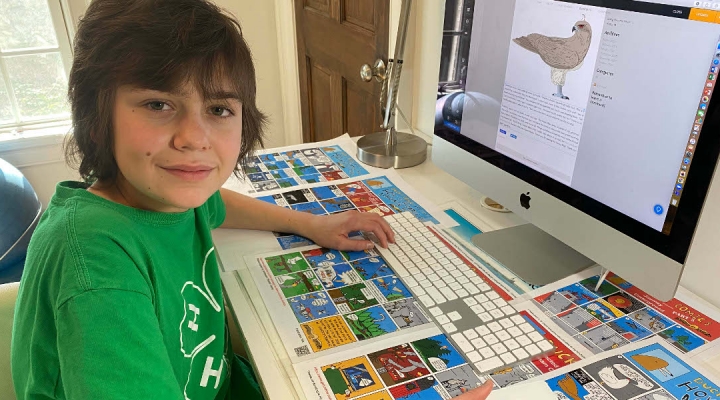 WESTCHESTER CO., N.Y. — This March, 14-year-old Henry McEvoy published his second educational comic, How to Predator Proof a Chicken & Duck Coop Part 2.  The “Ducky Comics” release features strategies to protect from snakes, coyotes, and bears.  Says Henry, “My comic will help people better understand how to predator proof their coop.  I’ve been making comics for a while, and I’m getting better at editing them.  A comic is the best way to get information out there.”  Henry, a 4-H member since 2018, created “Ducky Comics” last summer and has released multiple comics to support 4-H.  In September 2020, Henry announced over $800 raised for NYS 4-H, by promoting his comics online and around New York State.

Created using ink, paper, and the app Pixelmator, Henry’s comic suggests strategies to protect from each predator.  Henry was inspired by his own experiences: “For snakes, make sure that there are no openings over a quarter inch.  For Coyotes, avoid leaving your birds outside at night.  For Bears, reinforce your coop with metal plates.”  The cartoonist has been building his coop for two years, and uses his knowledge of predators to protect his flock.  Dena Altavilla, 4-H Youth & Family Development Program Director for Putnam County, says, “Henry is a remarkable young man with a passion for animals.  It’s wonderful to see him using his talents to help teach the 4-H community about keeping their chickens and ducks safe from predators.  We are so impressed with Henry’s commitment to 4-H, and look forward to seeing more cartoons from him in the future!”

Says Henry, “Since I already covered common predators such as hawks, dogs, and raccoons, I wanted to draw other predators that can cause trouble like snakes and coyotes.”  Henry plans to continue the How to Predator Proof a Chicken & Duck Coop series, by releasing strategies for owls, foxes, and weasels.  Henry, a Westchester County native, has been working on two separate online blogs: one focusing on his comic creations called “Ducky News,” and another about the lives of his flock called “Ducky Blog.”  For more about “Ducky Comics,” email duckycomics2020@gmail.com or visit DuckyComicsNY.com.

Raising Pigs: From Piglet to Porkchop