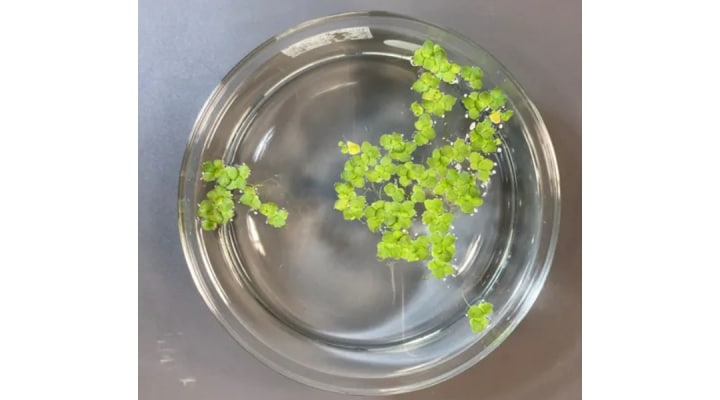 BOULDER, Colo. (THE CONVERSATION) — The Research Brief is a short take about interesting academic work.

Current industrialized food systems were optimized for a single goal – growing the maximum amount of food for the least amount of money. But when room and supplies are limited – like during space travel – you need to optimize for a different set of goals to meet the needs of the people you are trying to feed.

NASA and the Translational Research Institute for Space Health asked my lab to figure out how to grow an edible plant for long-term space missions where fresh, nutritious food must be produced in tight quarters and with limited resources. To do this, we turned to a plant called duckweed.

Duckweed is a small floating plant that grows on the surface of ponds. It is commonly eaten in Asia but is mostly considered a pest plant in the U.S. as it can quickly take over ponds. But duckweed is a remarkable plant. It is one of the fastest-growing plants on Earth, is the most protein–dense plant on the planet and also produces an abundance of important micronutrients. Two of these micronutrients are the inflammation-fighting antioxidants zeaxanthin and lutein. Zeaxanthin is the more potent of the two, but is hard to get from most leafy greens since fast-growing plants accumulate zeaxanthin only under extremely bright lights.

I proposed to the Translational Research Institute for Space Health that in addition to maximizing nutritional, space and resource efficiency, we also try to optimize the production of these antioxidants.

With just a little bit of experimentation, our team determined that under relatively low-intensity light – less than half as intense as midday sun on a clear summer day – duckweed accumulates more zeaxanthin than other fast-growing plants do in full sunlight while still maintaining the same incredible growth rate and other nutritional attributes that make it the perfect plant for a space farm.

[Deep knowledge, daily. Sign up for The Conversation’s newsletter.]

We are also testing another strategy that would grow duckweed in even lower-intensity light but would supplement those light levels with a few pulses of high-intensity light. In other plants, my team discovered that this can trigger high amounts of zeaxanthin accumulation and fast growth and, relevant to a spaceship, would cost less energy.

From these experiments, we are planning several customized growth conditions to optimize zeaxanthin production for a variety of different applications – whether it be a spaceship a greenhouse or even outdoors.

Why does it matter?

Due to the ionizing radiation in space, astronauts are susceptible to chronic inflammation and diseases caused by cellular oxidation. Zeaxanthin and lutein have been shown to fight radiation damage as well as eye disease, another common health problem that astronauts experience.

Many essential micronutrients have a finite shelf life – often only a few months. As astronauts begin going on longer missions, the only way they will be able to get these antioxidants is to grow them on board.

While we know that intense light makes duckweed and other plants produce zeaxanthin, plants quickly remove it from their leaves when light levels drop. To meet the specific challenge of producing large amounts of zeaxanthin, more work is needed on how to coax leafy greens to retain zeaxanthin post-harvest.

Our project used duckweed grown in sterile environments – we used plants stripped of the microbes that normally occur in the water on which duckweeds float. Since researchers know that optimizing soil microbes can increase plant productivity, our next goal will be to explore opportunities to further enhance duckweed productivity by experimenting with beneficial microbial communities.

Duckweed is already grown for many uses on Earth, and duckweed salad might be a high-protein staple in the diets of many future space explorers. But this work is also proof that win-win solutions to food production are possible.

With the right know-how, it is possible to make small changes to a few variables in how plants are grown and get them to produce more micronutrients. Similar approaches taken with other crops could benefit people across the world, not just astronauts. On Earth, slight changes in how people grow food, backed by scientific research like ours, offer opportunities to greatly improve food production systems such that they need less, produce more and keep people healthier.

This article is republished from The Conversation under a Creative Commons license. Read the original article here: https://theconversation.com/duckweed-is-an-incredible-radiation-fighting-astronaut-food-and-by-changing-how-it-is-grown-we-made-it-better-140535.