Home » Dual-Purpose Canola: An opportunity for extending forage in a dry year 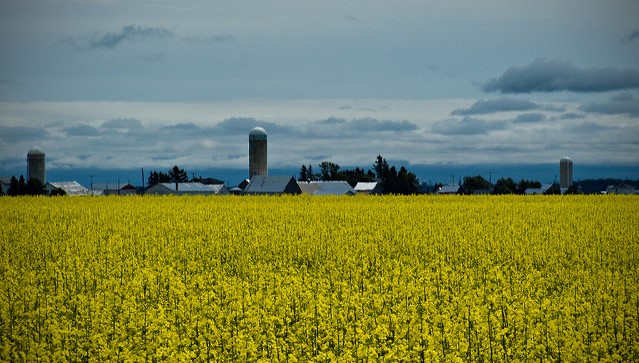 Dual-purpose canola, sometimes referred to as canolage, is the practice of seeding canola for forage and grain production. Dual-purpose canola is by no means a new concept, having been practiced and studied in Australia, however, it has not been widely practiced in the inland Pacific Northwest. (Michel Filion via Flickr/Creative Commons)

PULLMAN, Wash. — Unfortunately, 2021 is shaping up to be an unusually dry year with large portions of the Western U.S. experiencing drought. With approximately 37% of the area of cattle inventory experiencing drought as of April 13th, 2021 forage will likely be scarce as we progress into summer. One possible approach to increasing late season forages is through the little-used practice of dual-purpose canola. Dual-purpose canola, sometimes referred to as canolage, is the practice of seeding canola for forage and grain production. Dual-purpose canola is by no means a new concept, having been practiced and studied in Australia, however, it has not been widely practiced in the inland Pacific Northwest. With the impending forage shortage and good canola prices, 2021 may be an ideal year for attempting dual-purpose canola.

Several researchers at WSU and U of I have assessed the practicality of dual-purpose canola in the inland Pacific Northwest. The research has revealed that dual-purpose winter canola can be practically applied in the inland Pacific Northwest. At two different locations and years, Dusty (2017) and Creston (2019), canola seeded in July successfully survived the winter and was harvested the following year. In Dusty during 2017, the severity of grazing was found to decrease canola seed yield (see table). In Dusty in 2018, the canola was seeded in May in the hopes of allowing for two grazing events. The early seeding ended with a killing drought in the fall of 2018 in the ungrazed canola and drought that reduced seed yields to 700 lbs/acre in the grazed canola. The fact that the grazed canola did not completely succumb to drought, while the ungrazed canola did, indicates that grazing had the effect of reducing water usage. Soil moisture probes supported this conclusion as the canola that was grazed had reduced fall moisture usage when compared with the ungrazed canola. The best approach to dual-purpose winter canola in the inland Pacific Northwest appears to be an early July planting and an August or September grazing.

When managing dual-purpose canola, it is important to consider the forage quality and methods for improving the forage quality. Canola tends to be high in protein and may have high nitrate and sulfates. Any canola forage should be tested prior to consumption by cattle. Additionally, no nitrogen should be applied at planting unless soil reserves are near or at zero. Canola tends to be low in fiber, which means additional high fiber forage should be made available. High fiber forage can be made available by feeding hay, companion planting a high fiber grass, or making high fiber pasture available near water. In the fall of 2020, WSU researchers compared monoculture canola forage to canola forage companion planted with oats. The canola-oat forage had significantly higher ADF% and NDF% than the monoculture canola.