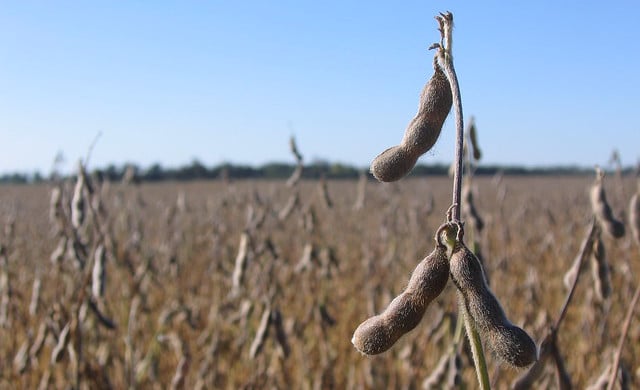 An early-October frost and general lack of autumn rainfall created a window for Virginia soybean farmers to harvest their crop weeks ahead of wetter years. (file photo)

PAMPLIN, Va. — An early-October frost and general lack of autumn rainfall created a window for Virginia soybean farmers to harvest their crop weeks ahead of wetter years.

The National Agricultural Statistics Service’s Virginia Field Office reported that most Virginia locations had zero precipitation in past weeks.

“There are abnormally dry to moderate drought conditions in the state,” said Herman Ellison, NASS state statistician for Virginia.

Soybean harvests are 59% completed, compared to 47% at this time last year.

“We usually do a lot of threshing in October and finish up between the middle of November to Thanksgiving,” he said. “So we’re finished a little bit early this year. We had that real early frost too, which helped these late double-crop beans to dry down quicker.”

Joanne Jones, a Virginia Cooperative Extension agent in Charlotte County, has spoken with other soybean farmers who also enjoyed an early harvest.

“In this area, we went the whole month of October with only one rainy day,” Jones said. “With a long rainy spell, mold or fungus can grow on the beans while still in the pod and cause damage.”

Research shows that early planting results in earlier harvest and is critical to producing high soybean yields, which is what many full-season crop producers are doing, Jones added.

Double-crop farmers like Carwile now are taking advantage of the dry spell to finish winter wheat planting. “Double cropping” refers to the harvesting of two crops off the same land in one calendar year, such as winter wheat in the spring and soybeans in the fall.

“This way farmers are not putting all their eggs in one basket,” he said.

Soybeans in the field will continue to grow until stalled by the next frost, Harper added.

“Frost might take the top off the yield but will help full-season beans dry down better,” he said. “But we’re way ahead on harvest this year because of the dry weather!”

Many Virginia soybeans are exported to Asian countries, and others are used in food for humans and animals and in industrial and consumer products, including building materials, cooking oil and crayons. 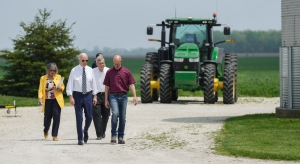 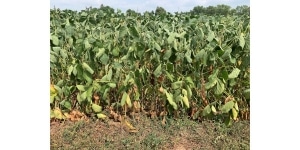