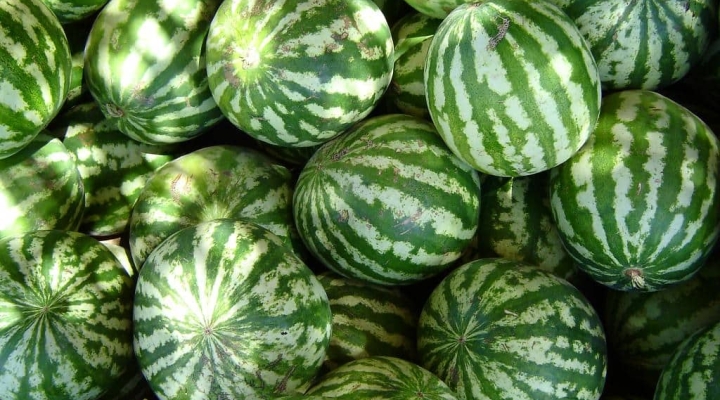 The drier the days at harvest time, the sweeter the watermelon. (photo by Ahmad, creative commons/flickr.com)

MILFORD, Va. — The drier the days at harvest time, the sweeter the watermelon.

Streaked with dark and light green stripes and featuring a sweet pinkish-red flesh, Bates Broaddus’ 40-plus-pound Jubilee watermelon fetched first place at the 2021 State Fair of Virginia open crops and vegetables competition. It was a good year for his watermelons, grown in a half-acre home garden in Caroline County.

“We always raised them on sandier soil,” Broaddus said. “You’d think a watermelon would want irrigation and plenty of rain, but drier years seem to have better watermelons!”

Broaddus said his grandfather, father and uncle raised watermelon as a commercial crop years ago, but eventually scaled back, now growing just enough to share with neighbors and friends.

“And, of course, some to keep for ourselves!” Broaddus said.

He will enter another watermelon in the State Fair competition this fall.

But his melons aren’t ready yet.

“We still have about a month and a half until the fair,” he calculated. “We just pulled one to see how it tasted. It wasn’t very sweet yet.”

“That’s good and bad for watermelons,” he said. “If it’s too wet around harvest time, it can impact the sugar content a little bit. Growers, if using drip irrigation, will reduce watering at that time to help concentrate the sugars in the watermelon itself.”

Jubilee watermelons perform well in Virginia and are naturally resistant to disease. The biggest challenge for growers is often keeping crows and raccoons out of the garden, Broaddus said.

“Raccoons will break one open and pick what they can out of it,” he said.

Watermelons are grown throughout Virginia, but primarily in the southern and eastern parts of the state. According to the U.S. Department of Agriculture’s 2017 Census of Agriculture, the state’s farmers grew 773 acres of watermelon on 338 farms.

When selecting a watermelon at a farm stand or in a grocery store, the National Watermelon Promotion Board suggests looking for one that is firm and free from cuts and bruises. A ripe watermelon should be heavy. To find the perfect melon, look for a creamy yellow patch—also called the ground spot—where it sat on the ground and ripened in the sun.

The 2022 State Fair will run Sept. 23-Oct. 2 at The Meadow Event Park in Caroline County. Visit statefairva.org/p/getinvolved to learn more about horticulture competitions.