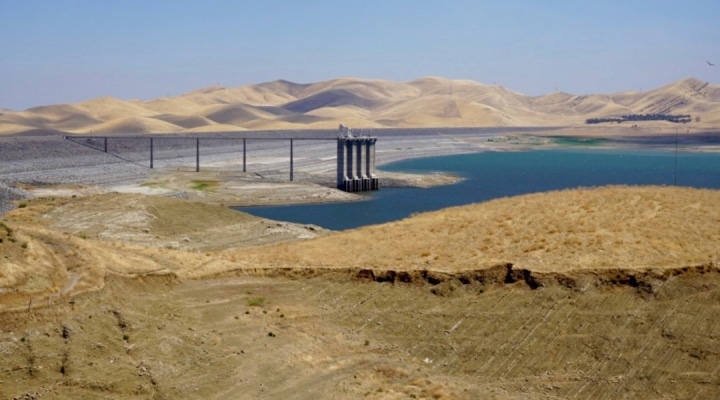 The massive San Luis Reservoir stood at just 10% of capacity during the drought in August 2016. (Courtesy Photo)

SACRAMENTO — Barring an unlikely April miracle that brings heavy rains and snow to fill California reservoirs, farmers around the state can expect to receive drastically reduced amount of water from state and federal water systems this year.

For example, the state Department of Water Resources in March slashed its allocations to farms it serves to just 5%, and water projects with more junior rights, such as the Westlands Water District, were recently informed by the U.S. Bureau of Reclamation that the scant 5% allocation earlier promised is now on hold.

The dry weather that has plagued the state for most of the past decade is why groups like the California Water Alliance (CalWA) work hard to remind policymakers that farmers can’t grow the crops we need without water – and that the water must be allocated equitably among competing needs.

“We try to advocate for having a reliable water supply,” said William Bourdeau, who chairs CalWA and the Central Valley Business Federation and is also the executive vice president of farming operations for Harris Farms.

“We want to make sure that the environment, communities and farmers have the ability to thrive. That takes planning. We were blessed by the pioneers who created the water infrastructure we enjoy but we need people to continue to push those efforts.”

The critical need to ensure a reliable water supply for California agriculture is why Farm Credit associations serving California have donated $100,000 to CalWA over the past decade. Supporting Farm Credit institutions are American Ag Credit, Farm Credit West and CoBank – all of which are part of the nationwide Farm Credit System, the largest provider of credit to American agriculture.

“The water system that serves the vast majority of Californians was completed in the late 1970s,” said Leili Ghazi, Senior Vice President, Farm Credit Banking Group, CoBank. “Since then, the state’s population has doubled to just under 40 million people and laws and regulations now require nearly half of the available water to be used for environmental protection. Without a reliable water supply, it will be increasingly difficult for many farmers to continue growing the crops that feed the nation, which is why CalWA’s efforts are so important.”

“CalWA is one of the most trusted educational voices on water policy and issues in the state, and they are playing an important role in the ongoing efforts to develop a strategy to update the water system to meet today’s needs,” Littlefield said. “Farm Credit strongly supports efforts to educate policy makers and the public about the role California agriculture plays in the U.S. food system, and how important agriculture is to the state’s economy.”

Bourdeau said 48% of the state’s water supply is used for environmental purposes, compared to 41% for agriculture and 11% for urban uses. He said the increased emphasis on the environment has reduced water supply to farmers, forcing them to fallow up to 800,000 acres annually.

“When we send that much water out to the ocean, it’s mismanagement. We need to remind policymakers that we have options. We can capture the snowpack and rainfall if we invest in the future and have policies that truly help the environment, but mankind is an important part of that formula as well,” he said.

CalWA is seeking a wide range of solutions to create a new approach to managing California’s water, including recommendations that: