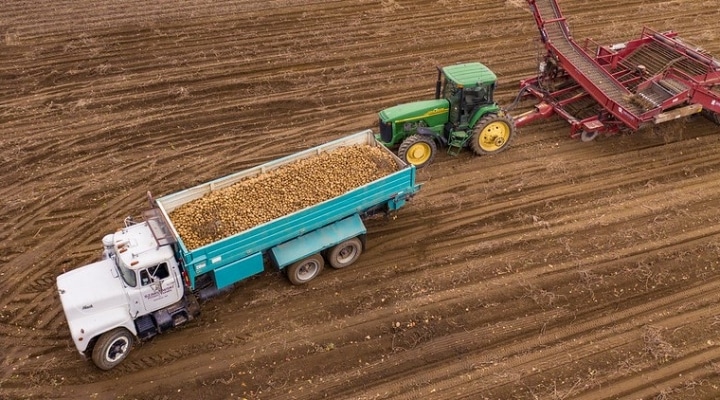 There’s been only 4.94 inches of rain since June 1, which is about 5 inches (12.7 centimeters) below normal, said meteorologist Joe Hewitt. The driest summer on record was 5.6 inches in 1995. (U.S. Department of Agriculture, Public Domain)

PRESQUE ISLE, Maine (AP) — Potato farmers are worried about their crops as the northern part of the state experiences one of the driest summers on record.

In Aroostook County, which is experiencing a severe drought, there has been no heavy rain since before Memorial Day, potentially reducing the yield, said Don Flannery, executive director of the Maine Potato Board.

Instead, there have been scattered showers that have helped some farmers but have left others high and dry.

“I’ve been around the potato industry for all my life, and I don’t ever remember it being this dry,” Flannery said.

The National Weather Service in Caribou reports that it could end up being the driest summer since records were kept.

There’s been only 4.94 inches of rain since June 1, which is about 5 inches (12.7 centimeters) below normal, said meteorologist Joe Hewitt. The driest summer on record was 5.6 inches in 1995.

Nearly a third of the acreage is irrigated, protecting them from the worst of the drought, said Dominic LaJoie, president LaJaoie Growers LLC, which has 1,600 acres (6.5 square kilometers) around Van Buren.

But it’s so dry that the ponds and wells that provide water for irrigation are drying up too, LaJoie said.

And stream and river levels are also at or near record lows in the northern part of the state, Hewitt said.

Up until the 1940s, Maine was the nation’s potato capital and the vast majority of farms remain in Aroostook County, a place so big it’s about the same size as Connecticut and Rhode Island combined.

The number of farms has dropped because of consolidation but acreage has stabilized in recent years at about 50,000 acres (202 square kilometers).

It remains a big business — the crop typically is valued at about $150 million — with potatoes being shipped to super markets and to processing plants to be made into chips and french fries.

The prospect of a bad harvest could send ripples through the economy.

“We have so much money invested in these acres that low yields is an economic strain on any operation. If the growers are stressed on income, then so are the surrounding businesses because we don’t have the money to spend in local business. It affects the whole region,” LaJoie said.

In Mapleton, Maine, Darren Chandler is feeling the pain, too, at DC Farms, which has 600 acres (2.4 square kilometers) of potatoes. None of his fields are irrigated and some of his plants are starting to show signs of stress.

“I’m just hoping for the best. That’s all you can do. You can’t worry yourself sick about things you can’t change,” Chandler said. “That’s why you’ve got to plan for the worst and hope for the best.”

Add some color to your yard!