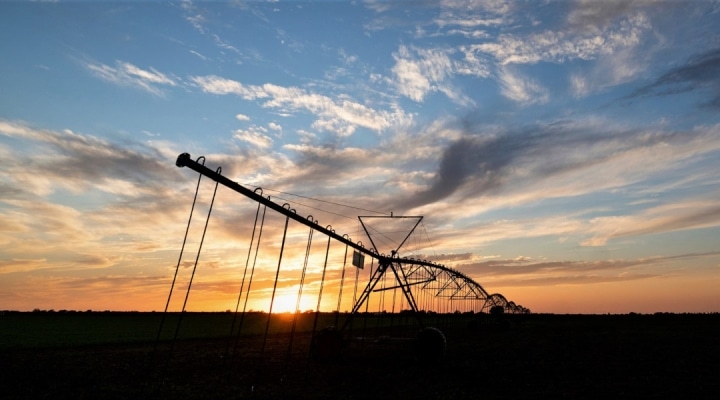 Irrigation pivots are running in many parts of the state in an attempt to provide some pre-plant moisture to soil following a winter dry spell. (Texas A&M AgriLife photo by Laura McKenzie)

COLLEGE STATION, Texas — Soil moisture levels continue to decline in most areas of the state after a months-long dry spell as warm-season crop plantings and preparations increase.

Texas A&M AgriLife Extension Service agents and specialists have reported critically dry conditions in many parts of the state over the last several weeks. The U.S. Drought Monitor shows more than 93% of the state is in abnormally dry to extreme drought and nearly 81% of the state dealing with moderate-to-extreme drought.

Plantings and fieldwork that require rainfall are being delayed in the hopes that moisture will arrive sooner than later. Cool-season forage and grain crops were failing in some parts of the state, or in poor condition and progressing slowly due to lack of moisture.

The lack of forage and dependence on heavy supplemental feed rations was driving deeper and deeper herd culls for cattle producers in some areas.

“It is very, very dry,” said Jourdan Bell, Ph.D., AgriLife Extension agronomist, Amarillo. “There is no surface moisture and very few fields have subsoil moisture. We have had negligible moisture this winter.”

Most of the Panhandle is experiencing extreme drought, according to the drought monitor.

John Nielsen-Gammon, Ph.D., state climatologist in the College of Geosciences Department of Atmospheric Sciences at Texas A&M University, said much of the state has been very dry since fall and the rain outlook does not look promising.

Over the past 120 days, Nielsen-Gammon said much of the state had only received 25% of its average rainfall for that period. Several cities also reported some of the driest periods between November and March on record.

Amarillo reported 0.5 inches of rainfall during that time, which represents the fourth-driest winter over the past 131 years. There was a drier stretch during the same time in 2017-2018.

Midland experienced the fifth-driest period on record with 0.3 of an inch and Waco was the third driest in 121-years with 2.94 inches of rainfall.

Cities like Houston and Beaumont received much more rain, but it was still the driest spell between November and March on record for Beaumont with 5.81 inches.

“Dry is relative in Texas,” he said. “A few swaths of the state have done OK, but most of the state has been dry since the widespread spring and summer rains ended last August.”

Nielsen-Gammon said the La Niña weather system, which typically delivers below-average precipitation to much of Texas, continues to hang on. Most forecast models expect the La Niña system to enter a neutral period by April.

But by April, weather in Texas is becoming difficult to forecast beyond a week to 10 days. Expectations for April through June are that the state will receive below-normal rainfall, but Nielsen-Gammon said the same was expected last April through June prior to the widespread and consistent rains.

He said this week and next do not look promising for most of the state either. Much of the state will not see much moisture. In East Texas, expectations are for scattered, mostly light rains, though a cold front later in the week could help maintain soil moisture.

“There are a few storm systems coming through, but it doesn’t look promising for most of the state,” he said. “After that, it’s hard to tell.”