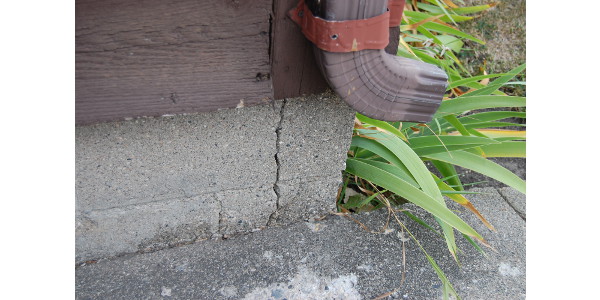 Drought conditions can cause soil shrinkage, which may result in cracked foundations in homes and other buildings. (NDSU photo)

FARGO, N.D. — Drought doesn’t just affect crops and plants. It also may cause problems for structures such as your house or farm building.

“Sticking doors or windows and cracks in walls or ceilings may be indications that the building is shifting due to soil shrinkage,” says Ken Hellevang, North Dakota State University Extension Service agricultural engineer.

As clay or other fine-particle soils dry, they shrink, creating gaps around the basement wall. This space exposes more of the soil to airflow, which increases the amount of moisture removal. In time, a gap extending to the base of the wall may allow airflow along the basement wall that will dry the soil under the foundation.

In addition, as the water table drops due to an extended drought, subsoil moisture decreases, resulting in soil shrinkage. The foundation’s support is removed as the soil shrinks, which may cause movement in the foundation. This movement can cause the structure to shift, resulting in doors and windows that stick because the walls no longer are square, and cracks that appear in wall sheeting such as drywall.

Differential foundation movement may stress the concrete enough to cause a crack to form in a basement wall. Another problem with a gap between the soil and basement wall is that it permits rainwater to run down the wall and may result in water getting into the basement.

Soil shrinkage also will occur under concrete slabs such as basement floors or driveways if the support base is clay or other fine-particle soil that swells and shrinks with changes in moisture content, according to Hellevang.

To minimize these problems, he recommends maintaining a relatively constant moisture content in the soil around the house. Water the soil evenly around the entire building during extended dry periods if the soil is pulling away from the basement wall. Apply water 1 to 2 feet away from the wall to wet the soil without getting water into the gap between the soil and house.

A soaker-type hose (a hose with sprinkler holes facing the ground or facing up with little pressure so the water only wets the soil near the hose) works well. Apply the water slowly with rest periods of several hours to permit the water to soak gradually several feet deep into the soil.

However, water added to the soil even 3 feet from the wall will migrate through the soil profile and wet the soil adjacent to the basement wall near the footing. It likely will not migrate enough to close the gap near the surface, but it will wet the soil at greater depths and minimize the potential for soil shrinkage that may affect the structure.

“Do not fill the crack next to the basement wall with soil,” Hellevang advises. “When the soil gets wet, it will expand, pushing on the basement wall, possibly with enough pressure to crack the wall.”

If doors are sticking or cracks appeared in wall sheeting, apply water to keep the soil from drying further and to rewet it to a normal level. Frequently, adding moisture will cause the soil to expand, bringing the structure into alignment and eliminating binding problems with doors and windows. Wait to repair wall and ceiling cracks until the soil moisture returns to normal.

“Remember that if the crack occurred due to soil shrinkage, the soil will expand when it gets wet,” Hellevang says.

You generally can use the size of the cracks in basement walls to determine if you need to hire a contractor to repair the foundation or basement. Fill small cracks to prevent water intrusion.

Alignment problems are more common with soil expansion, but they also can occur when the basement wall is not supported laterally due to the soil shrinking away from the basement. The amount of distortion in alignment can help you determine if you need a contractor.

Soil movement around other structures also can be a problem. Buildings that have a shallow footing may experience movement if the soil under the footing shrinks or expands with changes in soil moisture. Some buildings are constructed to accommodate the expected movement, but the movement may affect how doors and windows open.

Soil shrinkage also can cause movement in pole buildings. The footing at the bottom of the pole may move, and if the soil has pulled away from the pole, less friction will occur between the pole and soil, allowing the pole to move. Look for changes in alignment of walls and the roof or indications of structural movement.

Concrete slabs are supported by the soil under the concrete. If soil shrinkage is not uniform, gaps under the concrete may be created, and then the slab may not have the needed support to carry loads without cracking.

Because keeping the soil at a relatively constant moisture content is the goal, having a drainage system to remove excess moisture also is important. This includes making sure you have drainage pipe that is encased in granular material along the footing and a drainage plane along the exterior of the basement wall. Concrete slabs should have a granular base under them, and buildings should be constructed to keep water from accumulating next to them.

Courage to preserve our freedom