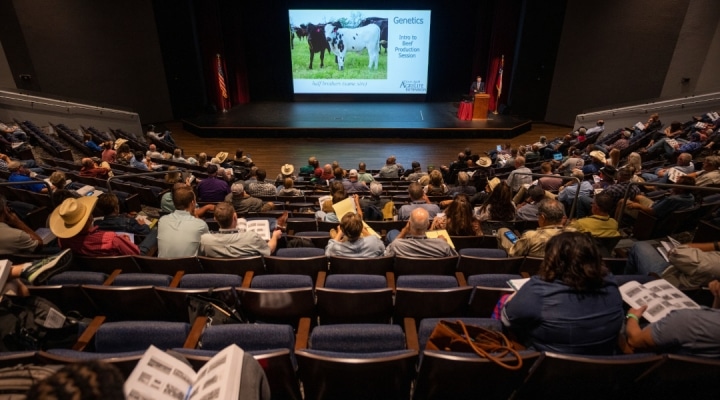 The Texas A&M AgriLife Extension Service and the Texas A&M College of Agriculture and Life Sciences Department of Animal Science hosted the event.

Jason Cleere, Ph.D., conference coordinator and AgriLife Extension beef cattle specialist in the Department of Animal Science, said more than 1,900 people settled into the Bryan-College Station area and another 175 online for the three-day event, most from Texas, but as many as 20 other states and 13 countries were represented.

“Our focus this year was the drought and how producers could mitigate the consequences of the drought,” Cleere said.

“While weather and outside economic forces consistently impact the cattle industry, there are some things that never change, and one of those is the cattleman’s ethos of stewardship,” Rick Avery, director of AgriLife Extension, told the crowd during the general session. “You have learned to adapt and are willing to learn new things. That’s evident by your attendance today.”

Avery said participants would find valuable educational experiences at the annual event that are needed to better understand the challenges on the horizon, including the latest technologies, management practices and research. But he reminded them that AgriLife Extension is in place across the state to help them when they return to their ranches.

AgriLife Extension maintains 250 county offices and is represented in all 254 Texas counties. This network of agents and specialists extends the research-based knowledge and provides vital education for ranchers striving to get through this tough year.

“During this ongoing drought, we have 160 agents and specialists who work directly in all phases of beef cattle production,” Avery said. “Their commitment to extending research discoveries is essential to helping the Texas cattle industry to be profitable and sustainable, not just for this generation, but for generations to come.”

Kristin Ritchie, a research analyst at New Frontier Capital Markets in Austin and a Department of Animal Science former student, said in her market outlook that ranchers shouldn’t expect things to turn around for a while, based on the cyclical nature of the cattle industry.

The drought plaguing the U.S. started about two years ago, Ritchie said, and could extend into next year.

“Cattle were being fed hay in July … that’s very expensive,” she said. “All hay prices are at record highs and are expected to average even higher over the next year. Given the current drought, it is also expensive to feed cattle grain.”

So, how should producers manage moving forward?

“Control whatever you can – not the weather or China or Russia — but the land and animals,” Ritchie said. “Make sound investments, improve genetics, take advantage of specialty programs and look at the Livestock Risk Protection program.”

Advice based on experience

Ron Gill, AgriLife Extension beef cattle specialist, Bryan-College Station, said a key priority for cattle producers trying to survive the drought is to go ahead and sell their cattle if they need to so they will have enough to get back into production when the weather changes.

“Producers need to determine what they can do to manage their natural resources now so they can come back in with the good genetics and good cattle and be profitable again later,” Gill said. “If you graze your grass too short now, it will not be able to recover when the rain comes. You need to look at optimum, not maximum, when considering the management of your natural resources.”

He said producers may need to feed cattle another nine to 12 months before this drought ends and recover begins.

“If you have a good grazing program, it will get you further through a drought, but it won’t get you through it,” Gill said. “Sell off what you need to manage what is left. Make sure you have a strategy in place to allow you to make the tough decisions.”

Some key points made by a panel of ranchers Gill moderated were: