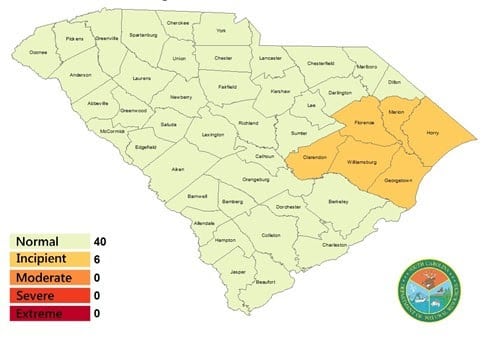 As designated by the South Carolina Drought Response Act, Incipient is the first level of drought, followed by: Moderate, Severe and Extreme. The general discussion among the Committee focused on how recent rain came just in time to keep more counties out of drought. The Committee requested to meet again in two weeks, recognizing that without persistent, widespread rainfall conditions can quickly deteriorate during the hot summer months.

“Horry and Georgetown have had some severe dry conditions since March,” Elliott said, “and while the rains in the last couple of weeks helped, most of it came down quickly and subsequently was seen more as runoff than soaking. What was absorbed helped green up things, but more would be needed to get us back to a more normal state.” Elliott also discussed the low flows in the Waccamaw River.

The Waccamaw River in Horry County was significantly impacted by the dry spring, with flows dropping from 1,000 cubic feet per second on April 1 to 18 cubic feet per second on June 1. The Northeast Drought Committee decided there was enough support to upgrade Florence, Horry and Marion counties to the first level of drought, and the Central Drought Committee followed by also upgrading the neighboring counties of Clarendon, Georgetown and Williamsburg.

According to State Climatologist Hope Mizzell, many locations across the Pee Dee received less than 5 inches of rain over the three-month period from March to May, which for some areas set a record for the driest ever. The drought was rapidly intensifying and spreading, then the pattern changed and much-needed rain arrived. Florence Regional Airport recorded only 4.28 inches from March to May, which is 50 percent of normal and the second-driest on record. Turn the calendar to June, and over the last nine days Florence received 3.07 inches of rain.

Priyanka More, SCDNR hydrologist, provided an update of the hydrologic conditions showing that improved streamflow levels across much of the state from recent rains along with groundwater levels remaining at or above normal status support the no-drought status for most counties. However, streamflow levels on the Waccamaw River continue to remain well below normal and support an incipient status for Horry, Florence and Marion counties.

The Committee also considers forest health and forest-fire threat before making its declaration. Darryl Jones, Forest Protection chief for the S.C. Forestry Commission, said South Carolina had an active spring wildfire season due to the dry conditions, with above-normal numbers of fires in both April and May. However, recent rains have helped spur new growth, and that has reduced the fire danger in the short term. While some areas are still dry, the chance of new wildfire ignitions is generally much lower now.

The West Drought Management Committee came to its decision quickly that conditions at this time did not warrant a drought declaration for the Savannah River Basin. While there was more discussion from the Southern Drought Committee, it also voted to maintain a no-drought status.

The Committee is cautiously optimistic based on the normal- to above-normal rainfall forecast, but will reconvene on June 23 to re-evaluate conditions statewide.