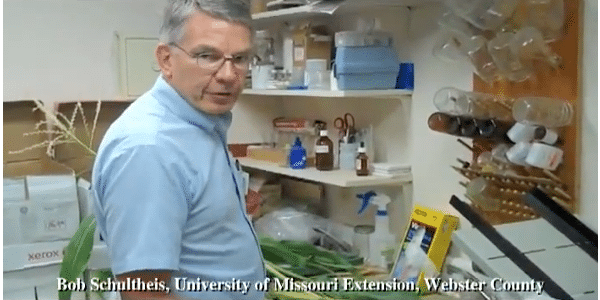 COLUMBIA, Mo. — Drought increases the chance of nitrate poisoning and prussic acid poisoning. High concentrations in plants and water can harm or even kill animals.

All plants take up nitrates, but not all plants develop toxic levels. Poisoning happens when excess nitrogen builds up in the lower part of some forages, which can happen despite good fertility and management decisions by producers, Scheidt says.

Drought, too much manure or commercial fertilizer, and cold or cloudy weather lead to excess nitrates. Corn, sorghum, sudangrass, sorghum-sudangrass hybrids and johnsongrass are forages to watch, she says. Livestock also will eat some weeds, including pigweed and lambsquarters, which may have toxic levels.

To avoid nitrate poisoning, do not cut hay less than 8 inches or force animals to graze more than 8-10 inches to the ground. Wait five days after a “good” rain to graze, Scheidt says.

If you suspect high nitrate levels, immediately move cattle to other pastures and call a veterinarian. Death from nitrate poisoning usually occurs within four hours. Too often, she says, the first sign of poisoning is death of livestock.

High nitrate levels do not reduce in stored hay. Dilute by blending high-nitrate hay with other feedstuffs. “If dry-baled, concentration level of nitrate is preserved,” she says. “In silage, nitrate concentration can dissipate 20%-50% over time.”

“Nitrogen is needed by the rumen bugs, and nitrate provides it,” Bailey adds. “Bugs break nitrate down to provide nitrogen. When fermentation is slow, not much nitrate is digested.” Unused nitrate, converted to nitrite, spills into the blood. Adding grain to hay diets speeds nitrate usage.

Research by MU Extension forage specialist Robert Kallenbach shows safe levels to feed. Ration the forage if tests results are in the 2,500-15,000 ppm range. Do not feed hay testing more than 15,000 ppm. Forage under 2,500 is safe to feed to all classes of livestock.

Poisoning symptoms include heavy breathing, frothing at the mouth, staggering, frequent urination, diarrhea and discoloration of the mucous membranes. The animal collapses, convulses and dies. Less obvious symptoms may be poor breeding, abortions and reduced calf gain. Testing fluid from eyes of dead animals for nitrate confirms the diagnosis.

Pregnant animals, old animals or those in poor body condition do not tolerate nitrates well. It is difficult to determine “safe” levels of nitrates, as animals may tolerate nitrates differently. For more information, see the MU Extension publication “Nitrate Problems in Livestock Feed and Water,” available for free download at extension2.missouri.edu/g9800.

Another concern during drought is prussic acid (or cyanide) poisoning. This sometimes happens when livestock cannot find desirable forage and turn to tree leaves to curb hunger. “Know what is in your pasture and keep livestock away from potentially toxic plants and trees,” says Scheidt.

She recommends the “rule of two” offered by longtime MU Extension livestock specialist Eldon Cole. “Wait two weeks or 2 feet of growth after extreme drought or a late frost before allowing livestock to graze susceptible plants,” she says. “Do not turn in hungry livestock, since high consumption increases poisoning potential.”

Prussic acid levels are highest in young, leafy tissue, whether in initial growth after planting or regrowth after clipping.

“Since it is the young, fast-growing tissue that contains dangerous levels of prussic acid, avoid grazing until the plant reaches a height of at least 24 inches to allow prussic acid to dissipate,” Scheidt says. “Unlike nitrates, which are persistent, prussic acid disappears during the hay curing or ensiling process.”

Is creep feeding right for your cattle operation

An investment in animal reproduction research

Drought is taking toll on spud harvest in Maine
October 6, 2020

Redefining drought in the US corn belt
October 1, 2020