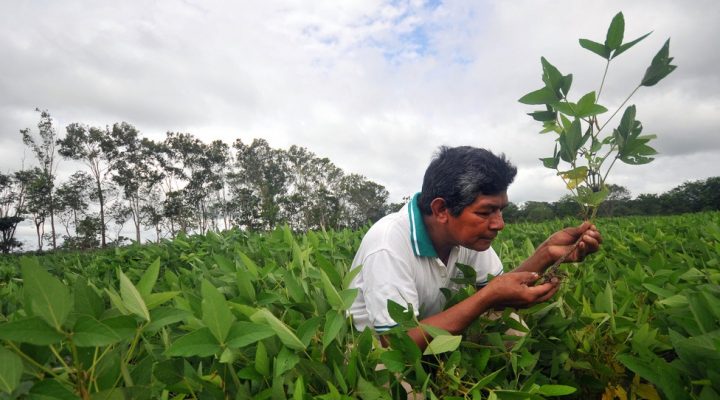 While portions of Brazil deal with dry conditions, the complete opposite is the case for some core soybean regions of Argentina. Heavy rains in late December and early January led to flooded and saturated fields, ultimately impacting the later planted and double crop soybeans. (Neil Palmer/CIAT, Flickr/Creative Commons)

The weather has been anything but uniform across the corn and soybean growing regions of South America so far this season. While main soybean producing states of Brazil have been handed very favorable growing conditions so far this year, the same cannot be said for the country as a whole. In fact, dryness in the northeastern part of the state continues to worsen and even expand. The abnormal dryness generally begins in the state of Goias and gets progressively more dry the further east you travel. A few pockets of dryness have even begun to appear in the eastern part of Mato Grosso. The remainder of the state, however, continues to see mostly favorable conditions. As it stands now, it is estimated that the dry areas will impact about 12-15% of Brazil’s soybeans. Luckily some of these areas are forecast to receive some rainfall over the next 7 days. However, it will likely not be enough to alleviate the current situation.

Farmers in Mato Grosso continue to harvest their early maturing soybeans and farmers in the state of Parana are gearing up to begin harvest efforts as well. So far in the state, it is estimated that approximately 4% of the crop has reached maturity. Over the next 7 days, Parana is forecast to be drier than normal in the southern portion of the state and generally near normal in the north. This will benefit early harvest efforts. The soybean crop in Parana is currently reported to be in good condition and could produce upwards of 18 million tons this year. If realized, this would mark an 11% increase from last season.

While portions of Brazil deal with dry conditions, the complete opposite is the case for some core soybean regions of Argentina. Heavy rains in late December and early January led to flooded and saturated fields, ultimately impacting the later planted and double crop soybeans. Many fields in the core regions of Cordoba, Santa Fe, and northern Buenos Aires are flat, leaving little to no room for water to run off. Acreage loss from this flooding is expected. Soybean planting typically ends by January 10th so many flooded fields did not have enough time to dry out and allow for replanting. In fact, just earlier this week, central Argentina received another bout of heavy rainfall, cementing the end of soybean planting and quelling any hopes of replanting. The next 7 days are forecast to be drier than normal across much of Argentina, but wetter than normal conditions return to Central Argentina for the 8-14 day forecast.

While Central Argentina deals with too much rain, Southern Argentina farmers are hoping rains start to pick up to help alleviate their ongoing drought conditions. Soybeans in southern Buenos Aires have had insufficient moisture to ensure proper germination and establishment. Planting of the crop in this part of the state has essentially been halted as a result. In a recent assessment, about 21% of soybeans in Southern Argentina still need to be planted, but little relief in the form of rain is expected over the next 2 weeks. Temperatures over the next week are expected to be well above normal for much of Argentina as well, which will only exacerbate the existing dry conditions in these regions.