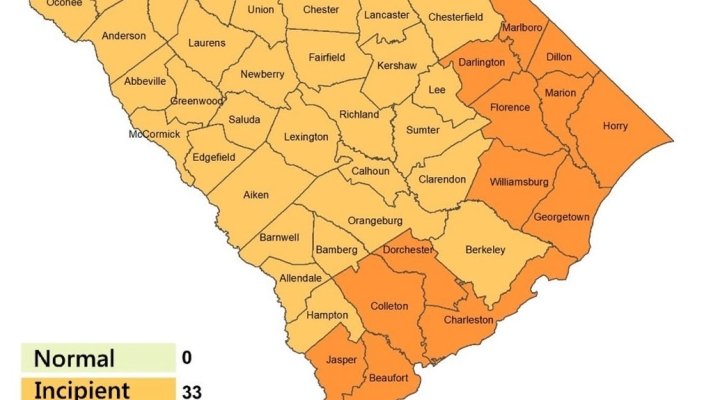 As designated by the South Carolina Drought Response Act, incipient is the first level of drought followed by moderate, severe and extreme. There was support from all drought indicators to upgrade the drought status, with some indicators already showing more advanced stages of drought. One of the seven primary indicators evaluated by the Drought Response Committee, the U.S. Drought Monitor, is already showing 52 percent of the state in moderate drought and 10 percent in severe.

Elliot Wickham, S.C. Department of Natural Resources water resources climatologist, explained that areas in moderate and severe drought, according to the U.S. Drought Monitor, have been dealing with dry conditions since May. Sixty-day precipitation deficits, along with above-normal temperatures in June, have caused intense soil moisture deficits to develop in those areas.

Evaporation rates have also been elevated, and areas need more frequent rain and rainfall totals just to keep up with water lost to evaporation. There were multiple reports of 100-degree temperatures, with several locations reaching 103 F. Not only were the daytime temperatures elevated, the nighttime lows were much higher than normal.

The Drought Committee is tasked with working to agree on a drought declaration for each county that takes into consideration multiple factors, including agriculture, forest fire risk, water supply and water quality. That can be a challenge, S.C. State Climatologist Hope Mizell said, as conditions for each of these factors can vary widely across a particular county. For example, rainfall for portions of Lexington County over the last 30 days ranged from only 0.84 inches to 5.08 inches.

The committee also tries to avoid a two-level increase in the drought designation unless there is overwhelming consensus among all the indicators.

The primary drought impacts being reported at this time are to agriculture, and for some counties those impacts are variable and may be significant. Forest fire conditions are also a concern.

Farmers and agricultural representatives reported impacts across the state.

“Rainfall totals have been sporadic,” said Kayla Stroman, agricultural program specialist with the Farm Service Agency Office, “Corn and tobacco crops are suffering. Hay production is low, and many producers are already feeding their winter hay and selling cows. Ponds and creeks are much lower than they were a few weeks ago.”

In addition to the effect on crops, worsening drought conditions in recent weeks have led to more wildfires in the state, according to the S.C. Forestry Commission.

The long-term drying combined with high temperatures have kept fine fuels such as straw and grasses dry, making it easier for wildfire to ignite. Larger limbs and debris have also dried significantly, resulting in additional fuel available on the ground and leading to more intense wildfires.

“These conditions increase the risk of damaging wildfires that can threaten the public, homes and developed areas,” said Darryl Jones, forest protection chief for the S.C. Forestry Commission. “And it makes it more challenging and increases safety concerns for firefighters on the ground.”

Priyanka More, SCDNR hydrologist, provided an overview of lake, streamflow and groundwater levels, with the majority of the streams and groundwater levels declining due to the lack of beneficial rain and high temperatures.  With the drought conditions intensifying, all water systems are asked to review their drought response plans and ordinances and implement as needed.

Even though the state has received some rainfall relief in areas this week, with more rain in the forecast, the potential rainfall is highly variable. The committee will reconvene in two weeks to review indicators and impacts.