Home » Drought declaration downgraded for much of SC 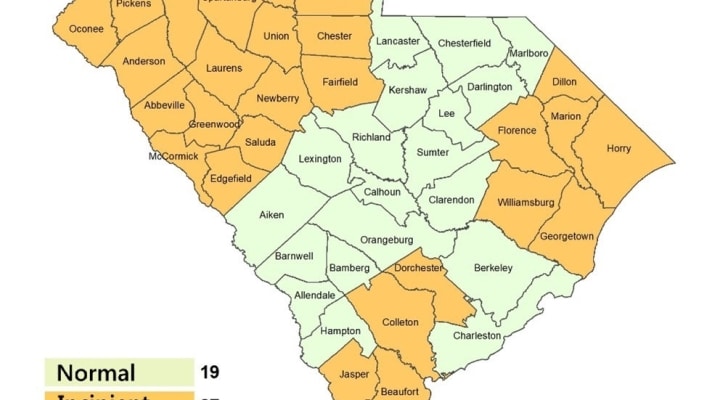 Higher than normal rainfall prompted the S.C. Drought Response Committee, meeting via conference call on July 13, to downgrade the drought status for 29 counties in South Carolina.  Many of the counties were just upgraded on June 30. The Drought Response Committee tries to avoid going in and out of drought stages so quickly but decided conditions had improved enough to make the change.

COLUMBIA, S.C. — Higher than normal rainfall prompted the S.C. Drought Response Committee, meeting via conference call on July 13, to downgrade the drought status for 29 counties in South Carolina.  Many of the counties were just upgraded on June 30. The Drought Response Committee tries to avoid going in and out of drought stages so quickly but decided conditions had improved enough to make the change.

Three counties (Charleston, Darlington and Marlboro) moved two stages going from moderate drought to no drought due to 6 to 11 inches of rain during the two-week period. The Committee decided to maintain the incipient declaration for 17 counties where rainfall amounts have improved, but not enough to support a status change at the time of the meeting (see map and table).

According to Hope Mizzell, S.C. state climatologist, rainfall since the last meeting June 30 ranged from 0.78 inches in Pickens to 12.41 inches in Charleston.  Other rainfall amounts across the state during the past two weeks include Anderson: 1.90 inches, Newberry: 2.36 inches, Lancaster: 3.04 inches, Florence: 4.61 inches, Walterboro: 6.54 inches, Reevesville: 9.44 inches, Hartsville: 11.24 inches, and Columbia: 11.76 inches.  The state also welcomed a break from the heat and high evaporation thanks to the rain and clouds.

Unfortunately, the rain was too late for certain crops in some counties.  Due to the very dry conditions in May and June, many livestock producers had to feed their hay reserve because of very poor pasture conditions. Their spring cutting of hay would normally not have to be used until November. However, the agricultural community is hopeful that if normal rain continues producers will end up with an average year for many of their crops.

The committee reviewed reports from Stephen Patterson, training and safety manager for the S.C. Forestry Commission.

Recent rain has reduced the wildfire threat in many areas across the state.  However, where rainfall has been spotty, fuels continue to be dry.

There was further support to downgrade the drought based on improved streamflow and groundwater conditions.

According to Priyanka More, S.C. Department of Natural Resources hydrologist, flows in the North Fork Edisto River gauge experienced a substantial improvement, with 14-day average flows increasing from only 9 percent in late June to 74 percent of normal this week.

Jason Thompson, of Charleston Water System, helped lead the discussion for the Southern Drought Management Area (DMA) and recommended a two-level downgrade for Charleston County. Counties in this DMA experienced much drier than usual conditions the first several months of 2022, leading to higher water utility demand, lower stream flows and very dry soil conditions which impacted the agricultural community the most.

Thompson emphasized that though potentially late for some of the agricultural growers, recent precipitation has led to improved conditions across all the Southern DMA counties, with the greatest improvements in Charleston County largely due to the more localized impacts from Tropical Storm Colin.

The S.C. Emergency Management Division had not received any drought impact reports, and there has been no water supply or water quality issues reported to SCDNR or the S.C. Department of Health and Environmental Control.

The S.C. State Climatology Office will continue to monitor conditions and the Drought Response Committee will reconvene in one month.