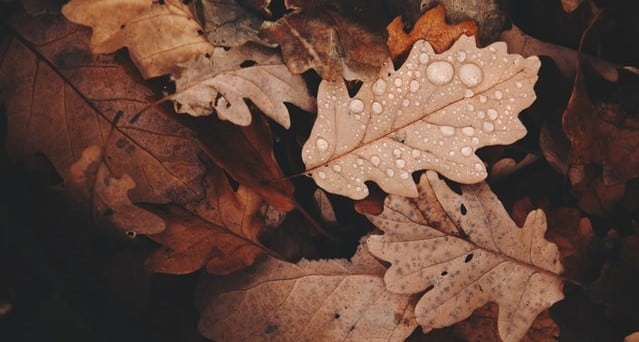 The Commonwealth experienced relatively dry conditions during the first half of October, while the latter half of the month brought higher amounts of rain, driving precipitation totals for the month to near normal to above normal. (Photo by Daniel Frank on Unsplash)

BOSTON — Following relatively higher amounts of rainfall in the final weeks of October, Energy and Environmental Affairs (EEA) Secretary Kathleen Theoharides declared that drought conditions have improved in most regions of the Commonwealth. In the Western, Connecticut River Valley, Central, Northeastern, and Islands regions, conditions improved to a Level 1-Mild Drought. In the Southeast Region, conditions moved to a Level 2-Signficiant Drought after experiencing Level 3-Critical Drought conditions last month. The Cape Cod Region remains at a Level 2-Significant Drought, unchanged from last month’s declaration. Additionally, conditions improved in the Charles and Millers River basins, which are now in a Level 1-Mild Drought in line with their regions after experiencing Level 3-Critical Drought conditions last month. Responding to worsening conditions in the Nashua River basin, Secretary Theoharides declared a Level 2-Significant Drought in the watershed.

“While we are pleased that conditions have improved or remained steady in many regions of the Commonwealth, dry conditions remain throughout the state, especially in the Southeast and Cape Cod Regions as well as the Nashua River basin, and residents should continue to take important steps to conserve water,” said Energy and Environmental Affairs Secretary Kathleen Theoharides. “We will continue to work closely with state agencies and municipalities throughout Massachusetts to address drought conditions, and urge residents to remain vigilant to minimize the impacts of the ongoing drought.”

“As we all spend time outdoors this fall, it’s important to remember that all parts of the state remains in some level of drought despite recent improvements,” said Massachusetts Emergency Management Agency (MEMA) Director Samantha Phillips. “These drought conditions pose an increased threat of brush and forest fires and we urge residents to exercise caution when using backyard fire pits, charcoal grills, matches, and other open flames during outdoor activities and to call 911 immediately if there is a fire to prevent the fire from spreading.”

The declaration was informed by recommendations and discussions from the November 5, 2020 meeting of the Drought Management Task Force (DMTF), composed of state and federal officials and other entities, and will remain in effect until water levels return to normal in the affected regions.

Drought indices showed clear improvement in the Charles and Millers river basins, and conditions in the watersheds are akin to their respective regions after experiencing Level 3-Critical Drought conditions last month. Though the Northeast and Central Regions are in a Level 1-Mild Drought, the Nashua River basin experienced clear indication of more severe drought conditions due to groundwater deterioration and precipitation, leading to a declaration of a Level 2-Significant Drought. A River Basin is the geographical area that contributes and drains into a river system, including its tributaries. Factors such as location, topography, and land use can cause river basins to react differently to drought conditions. There are 27 river basins in Massachusetts. For a list of communities in each region, click here.

The Commonwealth experienced relatively dry conditions during the first half of October, while the latter half of the month brought higher amounts of rain, driving precipitation totals for the month to near normal to above normal. Rainfall totals ranged from 5 to 6 inches across most of the regions, including higher totals above 6 inches in portions of Southern and Northeastern regions. Lower rainfall totals were noted in Berkshire County, northern Middlesex County, and parts of the Cape and Nantucket resulting in precipitation deficits at an emergency level in the Cape Cod Region.

Additionally, drought induced fire behavior has diminished with cooler temperatures and increased precipitation, lowering the ignition potential and decreasing the rates of spread. With leaf drop and pine needle drop almost complete, risk of ignition persists, however, fuel moistures in lower leaf litter and cooler seasonable temperatures are likely to keep rates of spread moderated. While the risk of wildland and brush fires has lessened, fire officials continue to remind the public to be very aware of this situation, and to exercise caution with all open burning and disposal of combustible materials.

The state continues to intensely monitor and assess the drought situation, and any associated environmental, municipal and agricultural impacts. Task Force officials also noted that while streamflow improved overall across Massachusetts, in particular the Northeast, Connecticut River Valley, Central, and Western Regions, groundwater levels suggested mixed conditions. While groundwater levels improved in the Western, Connecticut River Valley and Central Regions, the Northeast is still experiencing below normal groundwater levels, and record low levels in several locations across the state. Groundwater in the Cape Cod region remains above normal, however, it is on a downward trend compared to the prior month.

While conditions have improved, drought conditions are ongoing in every region of the Commonwealth, and the state continues to urge residents in every region across the Commonwealth to be mindful of the amount of water they are using, to be proactive in eliminating outdoor water use, actively reduce indoor water use, and to address plumbing leaks as soon as possible. 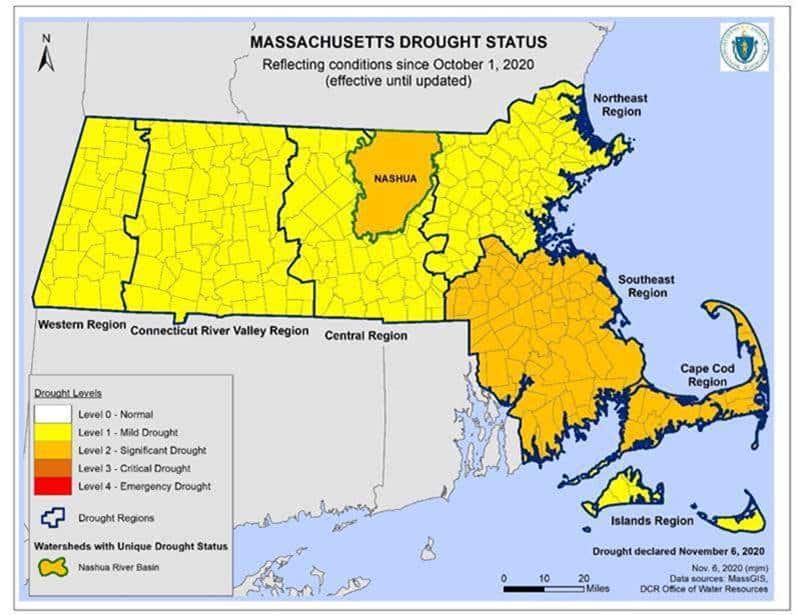 For Regions in Level 2 – Significant Drought

Short- and Medium-Term Steps for Communities:

For Region in Level 1 – Mild Drought

Immediate and Medium-Term Steps for Communities:

The Massachusetts Department of Environmental Protection (MassDEP) continues to provide technical assistance to communities on managing systems, including assistance on use of emergency connections and water supplies, as well as assisting towns on how to request a declaration of drought emergency.

“Conditions have definitely improved as precipitation deficits have shrunk due to October’s rainfall  and the fact that water use decreases as we reach the late fall and winter seasons,” said Commissioner Martin Suuberg of the Massachusetts Department of Environmental Protection. “This is a good time to review our indoor water use and fix any leaks we find.”

The declaration of a Level 2 – Significant Drought requires the Drought Management Task Force to continue to meet on a regular basis to more closely assess conditions across the state, accelerate outreach efforts on water conservation, coordinate dissemination of information to the public, and help state, federal and local agencies prepare any responses that may be needed in the future. The next meeting of the Drought Management Task Force is scheduled for Monday, December 7, 2020 at 10:00 am and will be held virtually via Zoom.

Last year, EEA completed a two-year process and updated the Massachusetts Drought Management Plan to better assess drought conditions across the state and maximize the state’s ability to prepare for and respond to a drought. The Plan also provides guidance to communities on drought preparedness and outlines response actions that can be taken at the local level.

For further information on water conservation and what residents and communities can do, visit the Executive Office of Energy and Environmental Affairs’ drought page.

The economic impact of agriculture in the Northeast