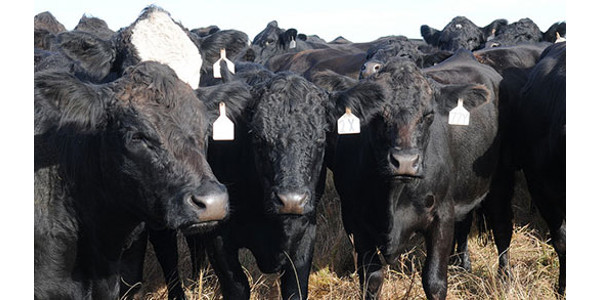 Drought in many parts of Kansas is creating challenges for producers to maintain farm ponds, an important supply of water for cattle. (Courtesy of K-State Research and Extension)

MANHATTAN, Kan. — As drought continues to cripple much of Kansas, livestock producers in the state may be scrambling for alternatives to maintain water supplies for their herds.

“It’s getting to be a real issue,” said Herschel George, a K-State Research and Extension watershed specialist based in eastern Kansas. “Here in eastern Kansas, our ponds are still relatively full, but as I talk to anyone in the Flint Hills, from Topeka and anywhere further west, it’s just a disaster situation waiting to happen.”

George and other Kansas State University specialists have developed various common-sense approaches, many of them outlined in the publication, ‘Waterers and Watering Systems: A Handbook for Livestock Producers and Landowners.’ It’s available online at https://www.bookstore.ksre.k-state.edu/pubs/S147.pdf.

“There are a lot of different approaches for waterers,” George said. “The handbook is a good look at those, kind of a catalogue where producers can get some ideas and investigate which one of them you might want to use.”

Among the ideas George often touts is putting in solar pumps from ponds or wells.

“I know out in central and western Kansas, solar pumps are being used more and more,” he said. “The systems are available and they’re working well.

“The only problem with solar systems is sometimes we have cloudy weather, so typically every day we have a limited amount of pumping time. If you do not have batteries, your pump is not going to come on until 8:30 or 9 a.m., and it will stop for you by 5 or 6 p.m. So you have to be able to get your pumping times in there and you have to have storage for overnight and evening drinking.”

Some producers have access to rural water supplies that help to bridge the gap caused by low water levels in ponds.

“We have a number of people that have gone ahead and put in a connection to rural water that may be passing by their farm, and installing a water tank,” George said, especially in low water times or drought situations.

To help protect ponds and water quality, he strongly recommends putting a fence around them.

“It does two things,” he said. “One, it keeps the livestock out of it so that we’re not tromping down the edges and getting that mud worked down into the middle of the pond. Number two, it’s a water quality issue and you can actually get better quality water for your livestock if you have a tank downhill from the pond.”

For ponds that are already dried out, George said one alternative may be to clean it out, though it is typically a costly process.

“Ideally you’d say, ‘well let’s just build a new pond instead of clean that one out,’ but in most of the cases the best sites for the pond were already taken with the first pond, so where are you going to put the second one?” George said.

He said that contractors who clean ponds typically use a bulldozer and an excavator, which may run up to $300 per hour for both pieces of equipment. At 20 hours of work, that’s about $6,000 just for moving the “slop and muck” out of the pond.

“I often encourage producers to go ahead and get that water line from their livestock water site back up to where they cut the slot in the dam (of the pond) installed early, because if not you’re likely to have 2-3 foot of mud sitting on top of where you’re going to want to build that water line,” George said.

For more information, producers can contact their local K-State Research and Extension agent.

Soybeans may pick up some spring wheat acres