LAKE CRYSTAL, Minn. — Some areas of the Upper Midwest and Northern Plains States received some much needed rainfall this past weekend, ranging from a few tenths of an inch to over two inches in some locations. The rainfall provided some much needed temporary relief to crop deterioration in areas hard-hit by drought conditions, while helping maintain crop potential in areas with more favorable crop conditions. Even though recent rainfalls are providing some short-term relief some extremely dry areas, the overall drought situation has continued to intensify in many portions of the region.

According to the latest “U.S. Drought Monitor”, over 75 percent of Minnesota is now categorized to be in either the extreme drought (D3) or severe drought (D2) category, with only the Southeast quarter of the State being largely spared from these conditions. Nearly all of North and South Dakota are at some level of drought, with over two-thirds of North Dakota and a large area of North Central South Dakota in either extreme drought (D3) or exceptional drought (D4) Nearly the entire western third of the United States is in either severe, extreme, or exceptional drought, with a majority of the region in the two top-level drought categories. Areas that are in the extreme or exceptional drought areas are likely seeing significant crop loss and extremely limited forage production, as well as longer term effects on lakes, rivers, streams, and ground water supplies.

Sometimes the “Drought Monitor” is somewhat misunderstood. It is meant to measure the overall long-term impacts of extended drought conditions, as compared to representing current crop conditions. This is why some areas that are listed in “moderate” or “severe” drought may still have fairly good crop potential with below average rainfall, provided that these areas have received some timely rainfall. Some portions of the Upper Midwest also benefitted from starting the 2021 growing season with above average levels of stored soil moisture, which has also helped maintain crop development through some very dry periods during the Summer months. However, it should be noted that the stored soil moisture levels have been rapidly depleted in many locations, with some areas now near zero available stored moisture.

There is not a lot of historical correlation between weekly crop ratings in early August and final corn and soybean yields. Timely August rainfalls can enhance final yield levels in areas that are not in extreme drought conditions; however, lack of late season rain events can reduce final crop yields in very dry areas. The latter situation occurred in portions of Southwest Minnesota, Northwest Iowa, and Southeast South Dakota in in 2020 when very favorable conditions early in the growing season were followed by very dry conditions in late July and most of August.

Some private companies will have Midwest crop tours later in August which may provide some indicators regarding 2021 corn and soybean yield trends in the region. However, many of those crop tours concentrate on the core areas of the Corn Belt in Illinois, Iowa, Eastern Nebraska, Southern Minnesota, and Southeast South Dakota, but do not reach into the most drought-stricken areas of North and South Dakota or Western Minnesota. In a year such as 2021 that may raise some questions regarding the resulting overall U.S. corn and soybean yield projections for the year. Based on the June 30 USDA Crop Acreage Report, North Dakota had the fourth highest number of soybean acres in the U.S. in 2021, and North and South Dakota combined trailed only Iowa and Illinois for total corn acreage. Given the wide variation in corn and soybean conditions across the Midwest and Northern Plains States, we will likely not have good U.S. yield estimates for 2021 until well into harvest season.

Emergency Having and Grazing of CRP Acres

In recent weeks, drought conditions have intensified in most of the Western third of the U.S., including the Northern Plains and Northwest Corn Belt States, while modifying a bit in the Central Plains and some Midwest States. Livestock producers in those areas are being especially hard-hit by the extended drought conditions with exhausted pastures and depleted feed supplies. Many beef cattle producers are being forced to reduce their herd sizes due to limited pasture and hay resources.

In recent weeks, USDA has been announcing the potential for emergency haying and grazing on land enrolled in the Conservation Reserve Program (CRP) in the areas of severe drought (D2) or higher. Livestock producers in all counties in North and South Dakota, and Montana are now eligible, along with a large majority of counties in Minnesota, Nebraska, and Iowa. Producers must notify their local Farm Service Agency (FSA) office before initiating any haying or grazing on CRP acres. Any hay that is cut and baled must be completed by September 30, 2021, and all bales must be removed within 15 days after the hay was baled. CRP emergency grazing can last no longer than 90 days and must be completed by September 30, 2021. For counties not in a designated emergency area, up to 25 percent of the eligible CRP acreage may be eligible having and grazing; however, this would result in a 25 percent reduction in the annual CRP rental payment.

Livestock producers should check with their local FSA office regarding eligibility, enrollment details, and requirements for emergency haying and grazing of CRP acres. A list of eligible counties for emergency haying and grazing and other details are available on the following FSA website: https://www.fsa.usda.gov/programs-and-services/conservation-programs/conservation-reserve-program/emergency-haying-and-grazing/index

The USDA “Livestock Forage Disaster Program” (LFP) is also available to assist livestock producers in drought-stricken counties. The LFP program allows haying and grazing on lands that are enrolled in Federal programs but does have certain restrictions on grazing of various types of grasses. There may also be some assistance available to certain livestock producers through the USDA “Emergency Livestock Assistance Program” (ELAP). Eligibility requirements and details on all USDA drought assistance programs are available at local FSA offices. Details and updates the USDA drought programs can also be found at: https://www.fsa.usda.gov/programs-and-services/disaster-assistance-program/index

Many State Departments of Agriculture and Land Grant Universities in the States impacted by the drought also have some very good information and resources available through their various websites.

LAKE CRYSTAL, Minn. — Most crop experts are agreeing that 2021 corn and soybean yields are likely to be highly variable and are very difficult to predict, especially in drought impacted areas of Minnesota, Western Iowa, North Dakota, and South Dakota. The recent rainfall events, along with some widespread severe storms, certainly could alter the […] 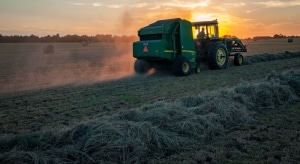 HURON, S.D. – Agricultural producers impacted by drought can now request haying and grazing on Conservation Reserve Program (CRP) acres in certain South Dakota counties, while still receiving their full rental payment for the land. “Drought is heavily impacting livestock producers in South Dakota and across the country, and emergency haying or grazing of lands […] 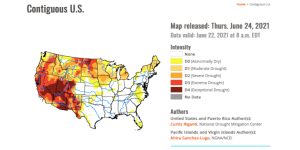 Crop conditions varied across the Midwest

LAKE CRYSTAL, Minn. — If you poll corn and soybean producers across the Corn Belt regarding the condition of the 2021 crop, you will probably get a variety of responses. Many portions of the Central and Eastern portions of the region have been getting some adequate rainfall, with some locations having excess amounts, while many […]