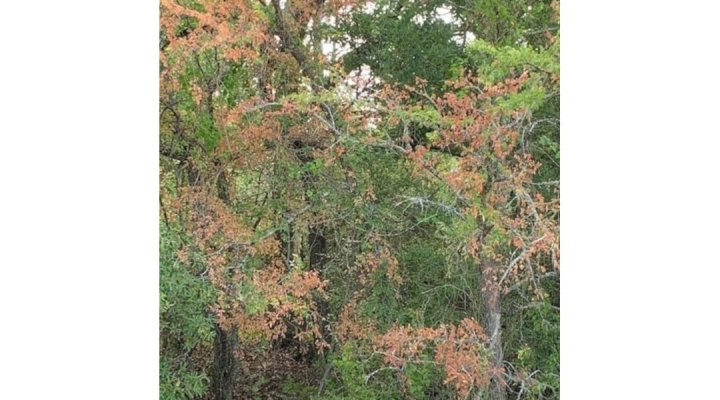 COLLEGE STATION, Texas — Elms are a big part of the Texas landscape in both rural and urban areas, but drought is exacerbating instances of native elm wilt statewide, according to Texas A&M AgriLife experts. These experts are urging landowners and homeowners to become aware of this disease, its causes and potential management strategies.

“Native elm wilt is affecting cedar elms all over the state,” said Dave Appel, Ph.D., professor emeritus in the Department of Plant Pathology and Microbiology at Texas A&M’s College of Agriculture and Life Sciences, Bryan-College Station.

Native elm wilt, also known as Dothiorella wilt, doesn’t get as much attention as Dutch elm disease, which mainly affects the more stately and majestic American elm, Appel said. But native elm wilt is currently a much more pervasive problem in Texas.

“Once you start to see the impact of native elm wilt on cedar elm trees throughout the state, you realize how important this species of elm is to the Texas landscape,” Appel said.

“Close examination of the branch will sometimes reveal a sunken, discrete lesion, known as a canker, which is typically along the margin of the healthy tissue and the diseased twig or branch,” Sheila McBride, Texas A&M AgriLife Extension Service program specialist and lead diagnostician at the Texas Plant Disease Diagnostic Laboratory, Bryan-College Station.

McBride said if the tree is infected, using a knife to carefully remove the bark in the cankered area should reveal a brownish discoloration in the outer sapwood, which would normally be white.

She said unlike the streaking found with Dutch elm disease, sapwood discoloration caused by native elm wilt is more localized to the region where the canker is present.

“If the infections persist, the disease can eventually lead to a decline and death of the tree,” McBride said.

“Native elm wilt is more widely distributed and has very different symptoms and effects than the more well-known and harmful Dutch elm disease,” she said “We have had a number of people from throughout the state send us samples that we have now confirmed have the Dothiorella ulmi pathogen that causes native elm wilt.”

McBride said the first step in controlling the disease is to prune each infected branch from the tree with a disinfected tool.

“Pruning cuts should be made at least 6 inches up to several feet below the cankered tissue, depending on the extent of the symptoms in the tree,” she said. “Between cuts, pruning tools should be cleaned with alcohol, 10% sodium hypochlorite or some other disinfectant to avoid spreading the pathogen into new wood.”

She also noted that measures should be taken to ensure the tree is vigorous, such as proper fertilization and watering practices. In general, one should try to limit the number of environmental stresses to which the tree is exposed.

McBride said individuals who are unsure of whether a tree may have native elm wilt can send samples to the Texas Plant Diagnostic Laboratory. Go to https://plantclinic.tamu.edu/forms/ for more details on submitting a sample.

Native elm wilt is caused by the fungus Dothiorella ulmi. While all elm species are susceptible to native elm wilt, the disease has most often been observed in cedar elms.

“The pathogen reproduces in tiny structures on the surface of recently killed twigs and bark,” she explained. “Spores exude from those structures and are then dispersed by environmental factors like wind and rain. Infection occurs through wounds on the youngest tissues of the twigs, probably made by insects, hail damage or other agents, such as freeze cracks.”

She said insects may also play a role in spreading the pathogen, but aspects of the disease are still poorly understood.

“That the disease is so prevalent in cedar elm is probably due to the tendency for that species to grow on marginal, droughty sites,” McBride explained. “Lack of water predisposes elms to enhanced infection and explains why the disease becomes more prevalent during longer periods of drought.”

McBride said she has an additional theory as to why the disease may be particularly widespread at this time.

“During Winter Story Uri, a number of freeze cracks appeared in trees as a result of the freezing and thawing of water in the tree’s vascular system,” she explained. “It’s very possible these freeze cracks and other damage during the freeze provided conditions for the pathogen to invade and thrive. This, combined with the additional stress from the extended drought, has delivered a one-two extreme weather punch to many of these trees and has exacerbated the spread of the disease.”

The free AgriiLife publication “Wilt Diseases of Elms in Texas” is available at https://tx.ag/NativeElmWiltPublication.