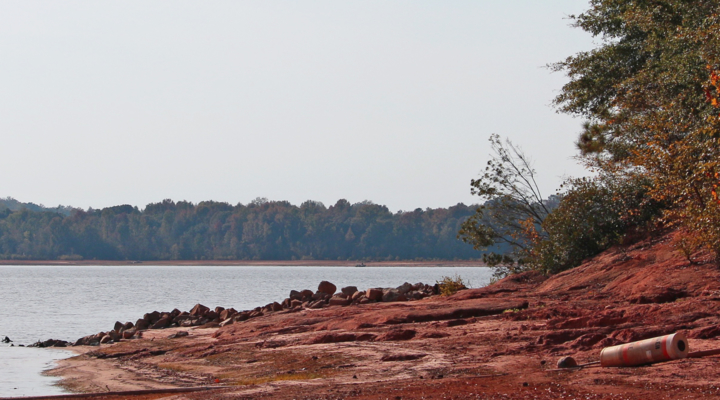 With 63 percent of the state in a moderate to exceptional drought and 37 percent experiencing at least severe drought conditions, according to the latest update from United States Drought Monitor, Clemson University experts say it could have both short- and long-term impacts on tree health. (photo provided by Clemson University)

CLEMSON, S.C.  — Abnormally dry conditions like those experienced across three-quarters of South Carolina recently are a double whammy for the state’s valuable forest resources: Drought puts stress on trees and, in turn, stress makes trees more vulnerable to threats such as native and invasive insects.

With 63 percent of the state in a moderate to exceptional drought and 37 percent experiencing at least severe drought conditions, according to the latest update from United States Drought Monitor, Clemson University experts say it could have both short- and long-term impacts on tree health.

“A lot of studies have looked at the impacts of drought on young and old trees and found that drought reduces radial growth and, in some cases, can lead to tree mortality,” said Clemson assistant professor David Coyle, a forest health and invasive species specialist.

But Coyle said repeated cycles of drought over multiple years, such as those South Carolina and other Southeastern states have experienced recently, can be particularly bad news for trees.

“There are lasting impacts from drought. It takes a tree a while to regrow roots it might’ve lost, reflush leaves it might’ve lost; it just takes time to get a tree back to full health after a drought,” Coyle said. “And we don’t really have a good answer for how long is long enough to get a tree back to where it was. In the Southeast in the last few years we’ve had pretty common droughts, especially in the late summer or fall — it seems like every year we go through this — and I don’t think there’s evidence that some of these trees ever fully recover.”

Coyle said repeated droughts can cause a gradual depletion of a tree’s energy and resources, impacts that are exacerbated by the sandier soils common throughout much of South Carolina.

“The worst this year has been around the Edgefield/Aiken area and also on the north side of Columbia,” he said. “Those soils are so sandy and they tend to get dry almost every summer.”

Perhaps just as problematically, drought-stressed trees are an open invitation to insect species such as pine bark beetles, especially those in the Ips genus.

“In 2016 there was a really bad drought — it was the year of the Great Smoky Mountains wildfire — and it didn’t rain for about six weeks in Tennessee, South Carolina and Georgia, and there were tree mortality spots from Ips beetles all over the place,” he said. “So there is evidence that drought is really going to increase the trees’ susceptibility to some of these common things, as well as having a negative impact on growth.”

And that’s a significant concern in a state where forestry ranks No. 1 among manufacturing industries in both jobs (90,624) and payroll ($4.1 billion) and contributes around $17 billion annually to the economy.

“Forest health is a serious issue during drought periods,” Heaton said. “Drought stresses trees and makes them vulnerable to insect and disease issues. Pine beetles are a good example where we see high tree mortality that under normal conditions would not happen, or at least not on a large scale.”

Forestry is also part of the state’s $41.7 billion agribusiness industry, and negative impacts from the drought could affect agricultural crop yields across the state. But the impact of drought on natural resources also has a significant impact on the state’s wildlife, as well.

“Wildlife species are subject to limited availability of palatable food sources,” Heaton said. “We can see body weights decrease severely during drought periods for many species. Additionally, there may be losses in the juvenile populations due to malnutrition. When we experience high mortality in juveniles, recruitment rates drop and the population may start the following year with below-normal adult population numbers.”

And because Southeastern ecosystems evolved under a paradigm where water was abundant and seasonal precipitation patterns tended to be predictable, ecosystems have to respond to those patterns being disrupted, according to Daniel Hanks, postdoctorate fellow in Clemson’s department of forestry and environmental conservation.

“Whether that is a period of intense or prolonged precipitation events or, as we are now experiencing, prolonged drought and extreme heat, if events are extreme enough, either in intensity or longevity, they can be outside of the abilities of ecosystems or parts of ecosystems to respond, thereby potentially disrupt ecosystem services and create additional vulnerabilities,” he said.

Hanks also noted the timing of prolonged weather events is important. For example, periods of drought have been shown to reduce trout population numbers and affect the condition of those surviving fish.

“Oftentimes, and understandably so, we welcome extended periods of rain after droughts; however, periods of high stream flows during periods when fish are not accustomed to such flows can also have detrimental effects,” Hanks said. “Brook trout, for example, reproduce during the fall when stream flow is typically low and their eggs need adequate winter flows to mature and allow the young to hatch in the late winter/early spring when adequate food resources are available. However, unseasonal heavy rains during the winter can cause scouring of the stream bed, thus killing the developing young fish.”

While groundwater issues related to drought are having a widespread impact on South Carolina, dry weather also has an impact on municipal water that residents use for things like watering their lawns.

Clemson assistant professor Amy Scaroni said practicing water conservation at home — using less water for your daily needs — reduces the stress on municipal water supplies during droughts. And while it is too late for the current drought, Scaroni recommended planning ahead for future droughts during wetter periods to protect the water supply during dry times.

“Install a rain barrel to collect rainwater and use it to water your plants. Plants actually prefer rainwater to treated water, so it’s a win-win for your landscape and our water resources,” she said.

To learn more about rain barrel maintenance and construction, download a free copy of the “Rainwater Harvesting for Homeowners Guide” produced by Clemson Extension Carolina Clear.

In terms of other things residents can do to proactively help alleviate the impacts of drought, Scaroni said there are many simple practices, such as disconnecting downspouts to let water drain into a landscaped bed or grassy area instead of routing it directly to a storm drain, creating a rain garden to help water infiltrate during storms and planting a low-maintenance landscape with native plants adapted to the South Carolina climate that require less watering and fare better during drought.

Scaroni also said turfgrass is the most irrigated “crop” in the U.S. and can require a great deal of water to remain healthy during dry periods. Thus, another drought defense option is to replace some areas of turfgrass with native plants, a pollinator garden or permeable hardscaping.

“By reducing impervious (hard) surfaces on your property, you will allow water to soak into the ground, which recharges the groundwater when rain is plentiful,” she said. “These seem like small actions, but with widespread adoption across our communities, we can recharge the groundwater during wet conditions and reduce the strain on our water supply during dry conditions.”

Protect cotton and soybean crops from hungry insects
May 14, 2020