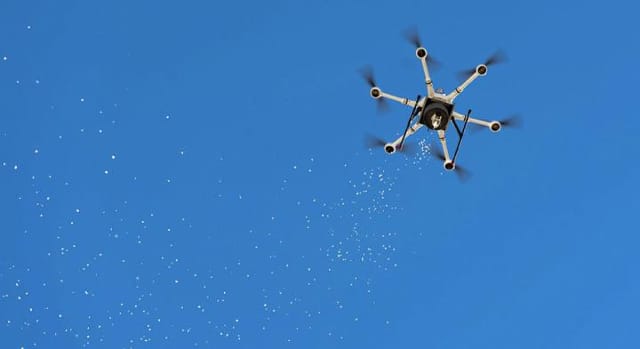 Drones keep getting smaller, while their potential applications keep getting bigger. And now unmanned aircraft systems are taking on some of the world's biggest small problems: insect pests. From crop-munching caterpillars to disease-transmitting mosquitoes, insects that threaten crops, ecosystems, and public health are being targeted with new pest-management strategies that deploy drones for detection and control. A variety of these applications are featured in a new special collection in the Journal of Economic Entomology. (Photo: M3 Agriculture Technologies/Journal of Economic Entomology)

ANNAPOLIS, Md. — Drones keep getting smaller and smaller, while their potential applications keep getting bigger and bigger. And now unmanned aircraft systems are taking on some of the world’s biggest small problems: insect pests.

From crop-munching caterpillars to disease-transmitting mosquitoes, insects that threaten crops, ecosystems, and public health are increasingly being targeted with new pest-management strategies that deploy unmanned aircraft systems (UAS, or drones) for detection and control. And a variety of these applications are featured in a new special collection published this week in the Journal of Economic Entomology.

“Ten years ago, there was not much happening in the space in terms of entomologists deploying UAS for pest management,” says Nathan Moses-Gonzales, CEO of M3 Agriculture Technologies, who compiled the research collection alongside Michael Brewer, Ph.D., professor of field crops entomology with AgriLife Research at Texas A&M University. But, in the time since, technological advances have opened the doors for creative collaborations between entomologists and drone developers, Moses-Gonzales says. “The evolution of UAS technology in entomology has been fascinating to watch.”

The collection in the Journal of Economic Entomology, featuring both newly released and recently published research, gathers examples illustrating both the progress and potential of drone technology in insect pest management settings. Case studies include:

Several articles in the collection also explore potential future applications for drone technology in insect pest management, including aerial spectral imagery of crops and plants to assess signs of pest damage, enhanced deployment of traps and monitoring systems to detect insects in hard-to-reach locations, and more.

“Our special collection speaks to the uniqueness of these partnerships and demonstrates the vital role entomologists play in bringing concepts to reality through methods development and field testing,” Moses-Gonzales says.

Of course, continued research, development, and experimentation will refine drone technology in the pest management context, and research in related fields such as automation and artificial intelligence will be critical, as well. Moses-Gonzales and Brewer say they see a bright future for this multidisciplinary field.

“Here, we hope that the Journal of Economic Entomology will serve as a venue that not only supports rigorous research but also details the development of new and novel tools for use in pest management,” Moses-Gonzales says.

–Entomological Society of America
via EurekAlert!