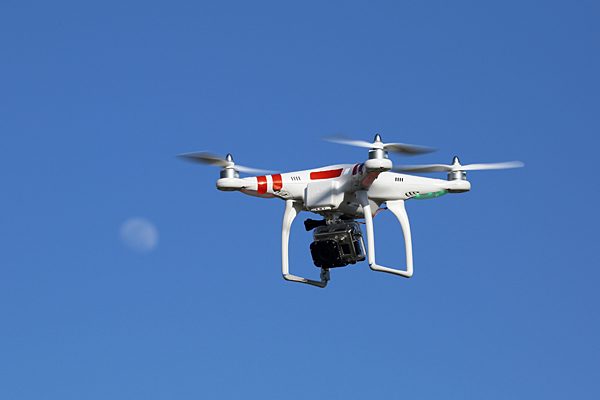 New rules issued last summer by the FAA allow anyone at least 16 years old to earn a "remote pilot certificate" to fly drones for commercial use. The process involves passing a test on aeronautical safety and a background check. (Wikimedia Commons)

ROCHESTER, Ind. (AP) — It sounds like a giant bumblebee, the 2-foot-square drone whirring to life. Its four props lift it off the ground outside Bruce Bowsher’s house and once it’s about 4 feet in the air, they lift up to give a camera an unobstructed 360-degree view.

Bowsher controls his from an iPad attached to a remote control with two joysticks on it. A tug on one and a push on the other, and his practiced hands can maneuver the drone in a smooth figure eight.

The camera gives him a drone’s-eye view and a map on the iPad screen shows where the drone is headed.

“I could just sit right here in my living room … and fly it downtown,” Bowsher said later, if his pilot’s sense didn’t keep him from being so foolish.

Bowsher, owner of Eagle’s View Aerial Photography, is among a growing number of drone pilots certified by the Federal Aviation Administration to operate commercially. As regulations permit more and more drone businesses to start up, he’s begun forays into agriculture-related aerial photography, where recent technological advances are allowing drones to be used to gauge crop health as well as record photos and video.

New rules issued last summer by the FAA allow anyone at least 16 years old to earn a “remote pilot certificate” to fly drones for commercial use. The process involves passing a test on aeronautical safety and a background check.

That’s a far cry from the process Bowsher went through as one of the nation’s first 1,000 commercial drone operators nearly two years ago. At that time, commercial operators had to be certified pilots — Bowsher maintains his private pilot’s license for the business — and had to apply for an exemption to rules that limited drones to hobby use only.

Both remote pilot certificate holders and pilots who received a commercial drone exemption must abide by FAA rules like those that require drones to stay within the pilot’s line of sight and to get no farther than 400 feet from the ground or the top of a building.

Drones also can’t fly over anyone who isn’t involved with the drone’s activities, according to a summary of regulations posted to the FAA’s website.

Bowsher, who got his student pilot’s license before he even had a driver’s license, started his drone photography business after becoming restless in retirement.

“I was just staring at the wall, going nuts,” he recalled. One day, a TV news broadcast used a photo provided by a drone operator.

“I was like, drone? The bells went off,” he said. With his background in home sales, he decided to look into drone photography with an eye toward marketing the service to real estate firms. He’s since branched out into working with other trades and recently recorded agriculture-related footage several times in the Cass County region.

Bowsher said drone footage can be used to generate a report detailing the field’s crop health and how much fertilizer ought to be used in different areas, among other things.

“I have the ability to give you what the canopy cover is, possibly even what the field will yield,” Bowsher said. That’s done by programming the drone to take photographs of a farm field in a pattern much like what a piece of farm machinery travels — going in strips down the length of the field, and tagging the photos with GPS information.

The photos are uploaded to mapping and analysis tool which generates a report Bowsher can hand the farmer a few days later. He’s most familiar with Datamapper, a subscription-based tool developed by agricultural tech firm Precision Hawk, but there are others on the market as well.

“Datamapper will give you pages and pages about what’s going on there,” Bowsher said.

But drone footage doesn’t have to be utilitarian. One of Bowsher’s recent projects involved creating a video and photo montage of harvest time on the Reese family farm near Rochester.

The corn and soybean farm has been in the family since the early 1960s, Reese said. His grandfather, Gene Reese, bought the original acreage for the family farm, and the descendants have since expanded it to about 400 acres.

“The one thing that my grandpa and my dad has taught me, and now they’re teaching my children, is to be good stewards of the land,” Alan said. “That’s what God would want us to do. And so we try to maintain the ground and our equipment, and treat our neighbors right.”

Alan’s father, Larry, is in his mid-sixties and still drives the combine for corn harvest. He lets his grandchildren, Alan’s sons Tyler and Grant, ride with him on the buddy seat.

At 10 and 7 years old, “they’re not old enough, of course, to actually operate equipment.” But they “thoroughly enjoy” riding along with Grandpa, Alan said.

And while he’s proud of the farm equipment they’ve acquired and maintained over the years, Alan says there’s little that’s high-tech about it. One device they use in spring uses GPS technology to eliminate missed patches when the family sprays weedkiller, but that’s about the only “electronic gadgetry” they have, he said.

“We do just fine with not being quite as electronic as we could,” he said.

But even the small family farm found use for drone technology.

“Whether it’s machinery or family walking around, it just gave a whole different spectrum than still photography could,” Alan said of video recorded by the flying camera.

Larry and his wife, Ruth, spend winters in Florida, where they’ve brought a copy of the photo-video montage. “That gives them a grand opportunity to actually show the people they’re talking to, whether they’re guests in their house, what they actually do during the summer months,” Alan said.

Bowsher, who also grew up on a farm, understood well how appealing such a video would be down the road.

“I’d give my eyeteeth to have something like that when my dad and I were doing it,” he said.

Data, what do the numbers really mean?