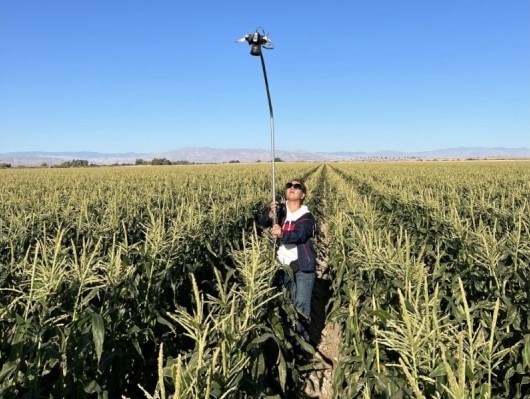 SACRAMENTO, Calif. — A new study suggests that drip irrigation for sweet corn can significantly conserve water, reduce fertilizer use and boost crop yield in the low desert of California – and likely in other areas of the state with similar conditions.

Although Imperial County is California’s top sweet corn-producing county, with about 8,000 acres planted on average each year, irrigation methods for this crop have been rarely studied in this region (or anywhere else in the state), according to Ali Montazar, UC Cooperative Extension (UCCE) irrigation and water management advisor for Imperial, Riverside and San Diego counties.

Montazar conducted a study in the Imperial Valley over two crop seasons, 2020-21 and 2021-22, to demonstrate and quantify the potential benefits of switching to drip irrigation from the more common furrow irrigation method. The study, available in a recent issue of UC Agriculture and Natural Resources’ Agricultural Briefs, will be published in a future issue of Vegetables West.

“I’m hoping with this project we can encourage growers to adopt it, because it seems very promising,” said Montazar, noting that drip irrigation is a “new practice” for sweet corn in California.

Among the 11 commercial sweet corn fields in the study over the 2021-22 season, the six that were under drip irrigation used, on average, 37% less water than the five under furrow irrigation. In absolute terms, the drip-irrigated fields saw an average water savings of 2.2 acre-feet per acre; for Montazar, who has studied drip for a variety of crops in the Imperial Valley, that was an astonishing result.

“I’ve worked with drip on processed onions, lettuce, alfalfa, spinach … we’ve never seen a figure like 2.2 acre-feet per acre, that’s huge,” he said, attributing the dramatic drop-off to the high volume of water required to furrow-irrigate the sandy soil in the Imperial Valley.

And by relieving plants of the stress from over- and under-irrigated conditions, drip irrigation helps keep soil moisture at its “sweet spot” – resulting in a 5% increase in marketable crop yield for sweet corn in the study.

“When we have a better, more efficient irrigation system, we can maintain soil moisture at a desired level, over time and space,” Montazar explained.

Because the benefits of drip appear to be linked to soil conditions (sandy loam, and other light soils), Montazar believes that this irrigation practice could deliver relatively similar water and fertilizer savings and improved crop yield in other regions across California, regardless of climactic differences.

“If you use drip in any part of the state, you have the benefits of drip – more uniform water application, more uniform fertilizer – that’s not related to the desert,” he said. “That’s part of the system’s potential.”

Montazar plans to follow up on his preliminary study with additional research on sweet corn and drip irrigation during the 2022-23 crop season.

See the original post on the UC ANR site here.