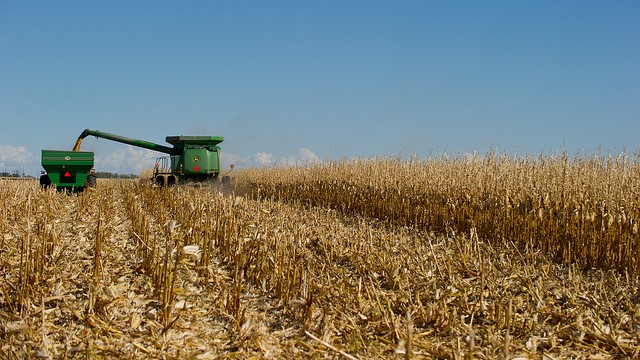 Many across the Corn Belt will have benefitted from drier than normal conditions to start this week. While Indiana and Michigan received some mid-week rainfall, those in the Western Corn Belt saw very favorable harvest conditions. (United Soybean Board, Flickr/Creative Commons)

As corn harvest continues across the U.S., weather conditions have finally begun to cooperate somewhat. Looking back at the timeframe from mid-September to mid-October, many key-producing states like Illinois, Iowa, Minnesota, Nebraska, the Dakotas, and Kansas were off to a much slower than normal harvest as conditions trended in the top 3 wettest for these states. While a majority of states still remain behind average harvest pace, most have been able to shrink the deficit between actual progress and the 5-year average. This progress is due in part to mostly drier than normal conditions from mid-October to mid-November. Take main-producer Iowa for example. By mid-October, the state had seen the wettest start to harvest in 26+ years and harvest was 26% behind average pace. Since mid-October, though, conditions have trended the 3rd driest in 26+ years and harvest is now only 7% behind average.  In the last 2 weeks alone, the state improved 41 points in their harvest (44% complete as of 10/29 and now 85% complete as of 11/12). Minnesota continues to be one of the furthest behind in their harvest. Although they have benefitted from the 8th driest conditions since mid-October, improving their deficit vs average from 33% to 15%, the state received snow in late October/early November, much of which stuck around through the start of this week. 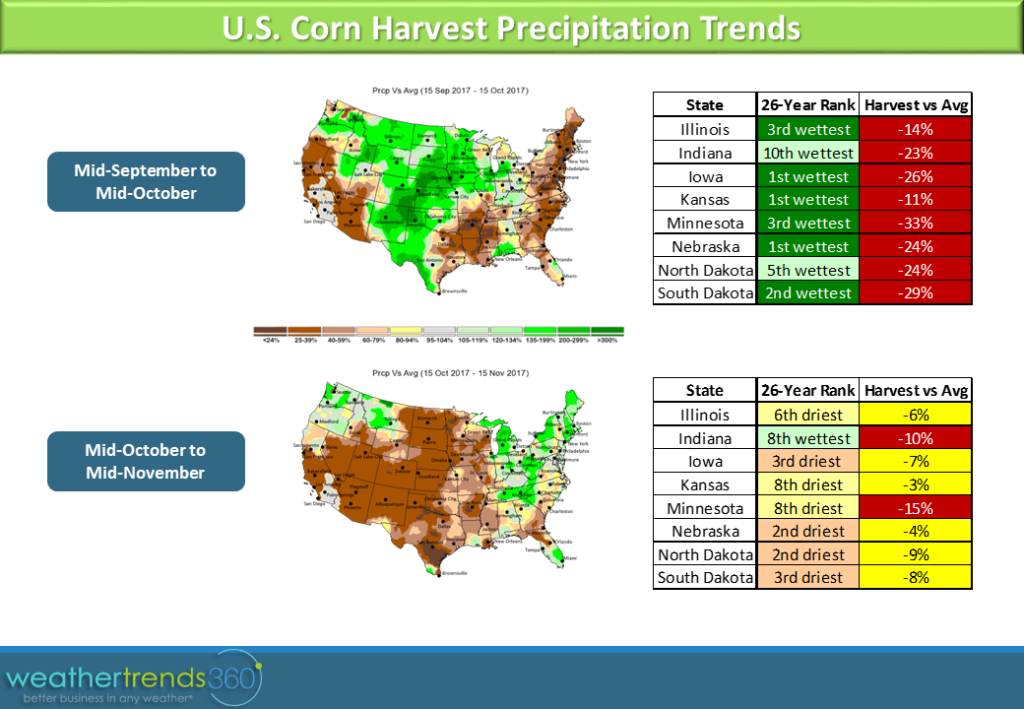 Many across the Corn Belt will have benefitted from drier than normal conditions to start this week. While Indiana and Michigan received some mid-week rainfall, those in the Western Corn Belt saw very favorable harvest conditions. Over the next several days, conditions are expected to remain mostly favorable across the Corn Belt. A few showers over the weekend and mid-week next week are possible from Minnesota to Illinois and eastward, but no significant, drenching rains are expected. Much colder than normal conditions are projected to move back into the Corn Belt late in the weekend, dropping lows below freezing for a couple days. Most states should be nearly complete with harvest by next week.

In Brazil, beneficial rains finally fell in some of the driest parts of the country, allowing farmers to make very favorable planting progress with their soybeans. The state of Goias was one of the driest spots within the soybean-growing region. By the end of October, only about 10% of their intended crop had been planted. After receiving several inches of rain over the last couple weeks, planting has jumped to 53% as of mid-November. Main-producer, Mato Grosso’s soybean planting continues to be mixed. In the western part of the state, planting is nearly complete. The central part of the state, where the largest percent of soybeans come from, planting is just over 90% completed. Moving into the northeastern portion of the state, however, only 30% of the crop is in the ground. Drier than normal conditions have significantly delayed planting in this part of the state. For the country as a whole, 57% of soybeans have been planted as of mid-November, trailing last year’s pace by only about 6%. Over the next 7 days, above normal precipitation is forecast for much of central and southern Brazil. However, trends in eastern Mato Grosso and northern Goias are a bit more mixed, leaning more toward a drier trend.