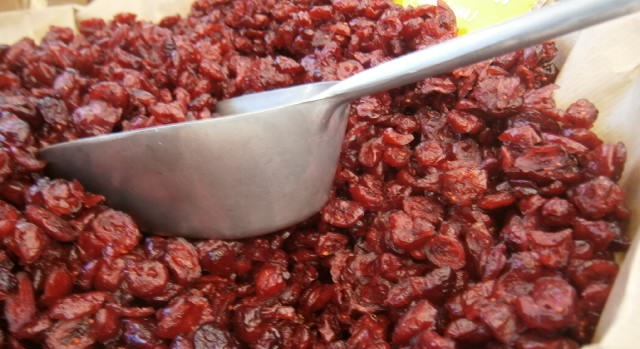 A serving of dried cranberries provides 10% of the Daily Value for fiber and ½ cup is equivalent to one fruit serving according to MyPlate guidelines. (Rhian, Flickr/Creative Commons)

CARVER, Mass. — Researchers from the University of Wisconsin – Madison evaluated whether one simple addition to the diet – one handful-a-day of sweetened dried cranberries – could positively influence the gut microbiome. Given the emerging knowledge that many biological functions, including immunity and disease-fighting capabilities, depend on a healthy gut microbiome, the authors of the recently published study in OMICS: A Journal of Integrative Biology, tested whether dried cranberries could make a difference. After just two weeks and with only 10 subjects, the differences were statistically insignificant but according to the researchers, were moving in the right direction. Thus, the role of dried cranberries in gut health may be worth further exploration.

“The aim of our prospective study was to determine if just one addition to the diet – a typical serving of sweetened dried cranberries – could alter a myriad of proteins and natural bacteria in the urinary proteome and fecal microbiome,” explained lead author, Dr. Jess D. Reed. “Previous investigations showed that cranberry compounds influenced gut health. Similarly, our findings were positive, albeit statistically insignificant, but motivate us to continue exploring.”

Researching the health benefits of cranberries is not a new phenomenon. Observational and clinical studies have raised interest in the potential health effects of cranberry consumption. In 2013, a team of scientists pulled together decades of research in a review published in Advances of Nutrition. In it, they stated that the association between cranberries and health appears to be due to the plant compounds in cranberries. Among the data reviewed were studies that evaluated the impact of cranberries on the risk of recurrent urinary tract infections, cardiovascular health and blood glucose management.¹

“This trial only scratches the surface of the potential role of cranberries in whole-body health,” adds study author, Chris Krueger. “These results give us another reason to delve deeper into the diverse effects cranberry compounds have on the human body.”

“We are pleased that scientists are taking a fresh look at cranberries,” says Terry Humfeld, executive director of The Cranberry Institute – a non-profit organization dedicated to supporting cranberry research and education. “We are especially encouraged by this study and the potential that dried cranberries could have on gut health.”

A serving of dried cranberries provides 10% of the Daily Value for fiber and ½ cup is equivalent to one fruit serving according to MyPlate guidelines.²