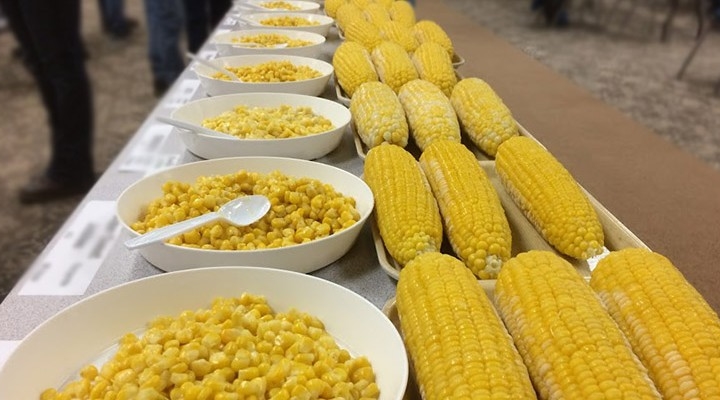 Processing sweet corn in the Midwest is grown at an average population of 24,000 plants per acre. But years of small-plot field trials have shown that certain hybrids are naturally density tolerant, and their performance improves when planted at higher population sizes. (University of Illinois)

URBANA, Ill. — In an industry struggling to maintain profitability, it’s curious that U.S. processing sweet corn – the corn that ends up in cans and freezer bags – is falling so far below its potential. Yet, that’s what a new study in PLOS One clearly demonstrates.

According to Martin Williams, an ecologist with USDA-ARS and associate professor in the Department of Crop Sciences at the University of Illinois, processing sweet corn in the Midwest is grown at an average population of 24,000 plants per acre. But through years of small-plot field trials, his team has shown that certain hybrids are naturally density tolerant, and their performance improves when planted at higher population sizes. His research also indicated that increasing populations of density-tolerant hybrids improved profit to both contract growers and vegetable processors.

The results were promising, but it wasn’t clear how well small-plot trials in Central Illinois translated to farmers’ fields throughout the Midwest.

”While processors were aware of our early work in small-plot field trials, some – myself included – were skeptical about the extent to which the industry could increase efficiency by adjusting plant population size,“ says Williams, co-author of the PLOS One study. “I decided to move the research into the very fields where processing sweet corn is grown.”

Williams and Illinois graduate student Daljeet Dhaliwal conducted on-farm trials throughout Illinois, Minnesota, and Wisconsin over a five-year period. The on-farm trials started with two hybrids, but one was pulled from the project early, so the researchers focused on fields grown with ‘DMC 21-84’, a known density-tolerant hybrid. They coordinated with processors and growers to plant test strips at population sizes ranging from 17,000 to 44,000 plants per acre.

Having a range of population sizes made it possible for the researchers to find the sweet spot where both yield and profit peaked. After planting the trials, which were nested inside production fields, growers continued to manage their fields as usual. At harvest, the researchers hand-harvested and measured marketable ears, and simulated processing by husking ears and cutting kernels with industry-grade equipment. In addition, they conducted an economic analysis to quantify profitability.

However, vegetable processors choose the hybrid, provide seed of that hybrid, and set the population size. So any change requires processor buy-in. Do processors benefit from increasing population of a density-tolerant hybrid?

“Yes,” Williams says. “Our five years of research in growers’ fields throughout the Midwest show that the processor could benefit on average up to $120 to $280 per acre, even after paying the cost of extra seed.”

Williams emphasizes that he is not telling the processing industry to increase population sizes for all hybrids, or in every field. “We know for a fact that several of the popular hybrids cannot tolerate higher population sizes. Nothing good would come of increasing populations for those. But for density-tolerant hybrids, we’re not currently taking full advantage of their genetic potential by growing them at populations established for their predecessors.”

Charlie Thompson, director of research for IFSI says, “Moving forward, our hybrids will be performing well at higher population sizes than are currently planted in the market.”

Williams knows the processing industry as a whole is concerned about the economic sustainability of sweet corn production. While the U.S. leads sweet corn innovation and production globally, rising production costs, coupled with stagnant yields and contract prices, have created an economic hardship. Recent announcements of processing plant closures later this month in Mendota, Illinois, and Sleepy Eye, Minnesota, will impact more than a thousand employees and growers.

The article, “Optimum plant density for crowding stress tolerant processing sweet corn,” is published in PLOS One [DOI: 10.1371/journal.pone.0223107]. The Department of Crop Sciences is part of the College of Agricultural, Consumer and Environmental Sciences at the University of Illinois.

Can you take a nitrogen credit following sweet corn?
August 31, 2021